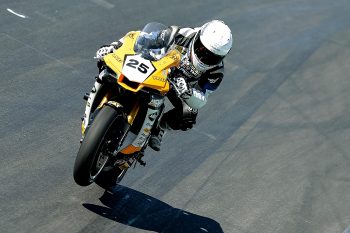 The former Supersport champion will saddle up aboard a privately entered CAT Yamaha YZF-R1 machine for the seven-round series in a similar set-up to his 2017 season, where he eventually scored a factory ride with YRT for the following two years.

“It’s great to be back on the CAT Yamaha once again in the same colours which have been synonymous with success in the past,” Falzon told CycleOnline.com.au.

“We have had some good results with our JD Racing prepared Superbike and we are looking to replicate those results next year. Top five would be good, but honestly I’m not sure where we will sit as I was faster on the YRT bike – I am more confident on the CAT bike, so this may even things out, we’ll wait to see.”

Falzon has indicated he’ll receive support from YRT, and will be equipped with Dunlop tyres this season. The three-time race winner will also pilot the 2019 R1 rather than the updated 2020 model.

“We can’t thank Dunlop Australia enough for backing us next year, coupled with support from YRT,” he added. “It’s shaping up to be a good year all round – CAT dealers William Adams and EPSA have stayed on board alongside Mainline dyno, we’ve had great partnerships with all of these in the past, it just feels comfortable.

“We know next year’s competition is looking to be tough, the bar has been raised and we are actually all benefitting from it -Australian racers are fast”

“We have tested at The Bend last weekend and I can honestly say that the 2019 YZF-R1 is a strong machine. I am soon addressing an arm pump problem which plagued me all season, so I’m hoping to be right for the official ASBK test at Phillip Island at the end of January.”