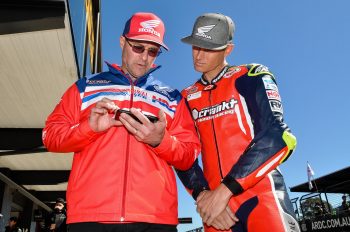 Free operated Honda’s factory racing effort for over a decade, signing Herfoss in 2014 before the New South Welshman went onto claim a pair of Australian Superbike titles under his guidance.

Since the closure of both his Superbike and motocross teams in 2017, Free took on a technical role at DesmoSport Ducati that saw him assist Mike Jones to the ASBK crown last year.

The newly-appointed position as Herfoss’ crew chief comes following the departure of former Penrite Honda team manager Shaun Clarke, who had previously worked under Free since the early 2000s.

“I’m very excited to work with Troy and Honda again,” Free stated to CycleOnline.com.au. “There’s a whole lot for me to learn and take on board – there are different structures, parts and components since my time running Honda’s team. There are all sorts of stuff that I’ll need to get my head around.

“I have noticed over the last couple of years while working with the DesmoSport guys, is that having the permission of crew chief is a very different role to what I have played in the past. Generally, I’ve worked with one of the riders as crew chief, but I’ve always had the responsibility of operating and overseeing the team and making sure both riders were being catered for fairly.

“To be able to focus on just the motorbike and the rider, and build strategy around that situation, is a whole lot easier than running the whole program. I think the way Deon has structured his Honda team, I think it will work exceptionally well.”

Penrite Honda Racing team owner Deon Coote is excited to draft in Free as Herfoss’ crew chief, as the team prepares for a transfer to Michelin tyres this season.

“Obviously Paul and Troy have had a good working relationship in the past, and he’s very familiar with the product and the brand,” Coote explained. “There was an opportunity there with Shaun [Clarke) leaving for him to come back into the Honda family.”