Australia to take on America in FIM Oceania sanctioned competition. 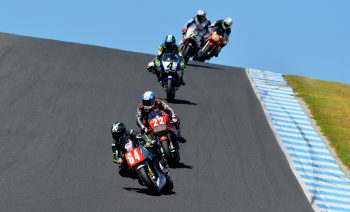 The 2020 FIM Oceania Historic Road Race Cup will return to its original format when Australia takes on America at the International Island Classic on 24-26 January.

The cup’s competition will focus on the International Challenge, with the top five performers from each country combining their points in a bid to win the crown.

“This year the battle intensifies as the Australians take on the Americans, with both fielding strong teams,” said FIM Oceania president Glen Williams.

“The cup will again be staged as part of the 2020 International Island Classic which is a standout event for the Oceania region.

“FIM Oceania is responsible for developing motorcycle sport within Oceania whether in the form of junior road racing, motocross, speedway and via this exciting event of FIM Oceania Historic Road Race Cup. I’m sure the 2020 Cup will be brilliant and add another dimension to the historic festivities’’.

The FIM Oceania title was launched in 2017, with Australia winning the first two years, but being knocked from their pedestal in 2019 when the format changed to non-International Challenge events and New Zealand took the prize.