Spaniard 15th on the timesheets during both days of testing at Portimao. 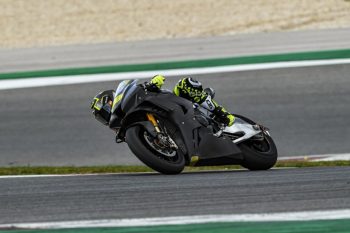 Spaniard Alvaro Bautista says it was frustrating spending additional time in the garage with an increased testing workload at Portimao, which came as a result of a wet Jerez test last week that hindered development.

Bautista made a high-profile move from Aruba.it Racing – Ducati to the newly-introduced Honda HRC squad for 2020, where teammate Leon Haslam and himself are in the early stages of developing the all-new CBR1000RR-R.

The title contender struggled to match the pace of the leaders in Portugal, finishing 15th on the timesheets during both days of testing.

“These tests have been tough for us because in Jerez we could not test much due to the bad weather,” Bautista admitted. “So we had to concentrate all the work here in Portimao, basically trying to complete four days of work in just two days. That meant we were forced to spend more time inside the garage than on track and this of course is a bit frustrating when you just want to have everything ready, put in a new tyre and go for it.

“Anyway, this is the kind of job that has to be done with a new project. I think we now have a lot of data that can be useful in developing the bike and we’ll see how the next step goes in Australia. Those tests prior to the first round will be very important.”

Bautista has one more opportunity to come to grips with the new Fireblade ahead of the season-opener, with a test due to take place at Phillip Island in the lead-up to round one on February 24-25.