YRT to sample 2020 R1 this month according to Halliday 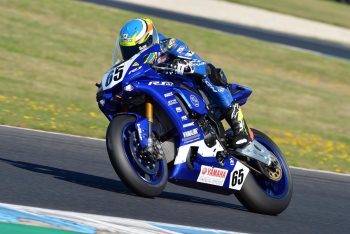 Yamaha Racing Team’s Cru Halliday has indicated the squad will sample the 2020 YZF-R1M in ASBK trim this month at Wakefield Park, the New South Welshman hopeful of piloting the updated Superbike at Phillip Island’s season-opener.

The 2018 Supersport champion was onboard the 2019 model at last week’s test at the Island, where he wound up fifth and eighth on the timesheets during both days of testing.

Halliday revealed a lack of race-spec parts was the reason the team wasn’t equipped with the 2020 model, however they’re anticipated arrive for the outfit’s private test in the middle of the month.

“We’re going to test this month at Wakefield Park, and that will be on the 2020,” Halliday revealed to CycleOnline.com.au. “I haven’t ridden it in race form yet because they’ve sort of been delayed on parts – they’re waiting for them to come from Europe. I’ve ridden it in stock form and it felt pretty good.

“I’m guessing if all goes to plan, we might be on the new bikes [for Phillip Island]. If they’ve got time to build them and have everything ready, then I don’t see why not. We just have to see how this test goes and see if we have them running smoothly – I don’t see why wouldn’t be on them for round one.”

Phillip Island’s opening round of the 2020 Mi-Bike Motorcycle Insurance Australian Superbike Championship is scheduled for 27 February-1 March, taking place alongside round one of the Motul FIM Superbike World Championship (WorldSBK).