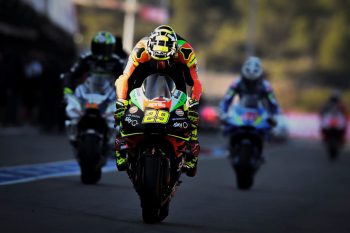 Andrea Iannone will remain provisionally suspended after allegedly testing positive to a banned substance under the World Anti Doping Code last year, his International Disciplinary Court (CDI) hearing that took place today yet reach a verdict, ruling him out of the Sepang MotoGP test.

Iannone’s adverse reading was collected in a urine sample from him at an in-competition test carried out by the FIM at the penultimate round of MotoGP in Sepang, Malaysia, at the beginning of November 2019.

The Italian, who’s B sample matched the result of his A sample, accepted the opportunity to present his case at the FIM Headquarters this week in the presence of a panel of three judges of the CDI.

The proceeding is still ongoing until a CDI decision is finalised, meaning he remains provisionally suspended until then and is therefore barred from participating in any motorcycling competition or related activity until further notice. Aprilia Racing and Iannone were hopeful of a succesful outcome that would allow him to test in Malaysia.