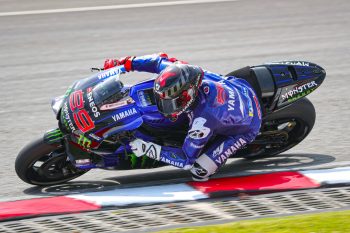 Recently retired Jorge Lorenzo says the Yamaha YZR-M1’s characteristics are still the same after making his return to the manufacturer a the Sepang MotoGP shakedown test, the multi-time world champion admitting he was concerned they would be worse prior to stepping aboard the motorcycle in Malaysia.

The Spaniard, who earned three world titles with Yamaha in the premier class, seemingly adapted quickly to the M1 as he completed 46 laps, setting a time similar to that of his qualifying lap at the venue in 2019 on the Repsol Honda RC213V.

Lorenzo mentioned the initial laps were emotional, although he found comfort in the bike’s characteristics being familiar to what brought him so much success in his decorated career.

“It was a very emotional day, because after three years, I’ve come back to Yamaha as a test rider for the team,” Lorenzo commented. “The Yamaha made me very excited coming here, and the first laps were emotional. Suddenly I could feel the characteristics of the bike didn’t change too much, so this was very positive because I was afraid the characteristics could be worse – the bike is very competitive already. It has a lot of potential, and we already have some ideas for the future.

“My physical condition was okay – I didn’t have pain on the bike, the bike wasn’t physical, so it was a very satisfying day. Obviously, I still need more laps to understand the best way to take the bike.”

It’s not yet clear if Lorenzo will be out on track at the official pre-season test this week in Malaysia.