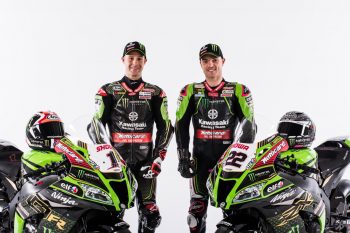 Kawasaki Racing Team has launched the 2020 ZX-10RR that will be piloted by five-time reigning champion Jonathan Rea and Alex Lowes in the Motul FIM Superbike World Championship (WorldSBK).

The well-attended team presentation took place at Kawasaki’s European headquarters in Barcelona, Spain, where both riders donned their 2020 look for the first time.

“We have had a solid pre-season where I felt fast and consistent and the target is to win another championship – for the team, Kawasaki and myself,” Rea commented. “Tonight is the start of another great year together.”

“This is the time when it all becomes real and it is really fitting to do it in our team workshop where all the hard work goes in preparing our bike and our season. It has been particularly nice to do it in front of many of our sponsors and the family and friend of our mechanics. Not long until the season starts now!”

Proven WorldSBK race winner KRT newcomer added: “I have been with the team for a few months now but we have had the chance to show our supporters and sponsors the final colours for our championship challenge tonight.

“It has been great to be part of this team and it was really nice to be seen in Kawasaki green for the first time. This has been a fantastic event, especially with all the team here in their own regular working environment. After this, it is down to Australia for the first race of the season.”

The WorldSBK head to Phillip Island on 27 February-1 March for the opening round of the series.