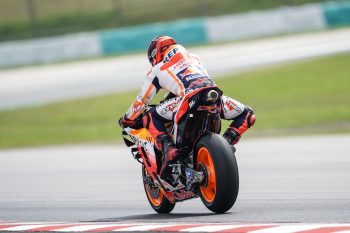 Reigning MotoGP world champion Marc Marquez admits his crash on day three of testing at Sepang came as a result of discovering his physical limit.

The Spaniard was easing back into riding throughout the three-day test after undergoing shoulder surgery in the off-season, the Repsol Honda rider expressing his relief to come out of the incident unscathed.

“I finished the day with a good feeling as this morning we had a good rhythm and I put in the most effort today,” said Marquez. “I had a small crash at turn 15, but this was down to physical condition.

“It’s good to know where the limit is, of course it would have been better to not crash but I am okay after it. Today I did 47 laps again, but it was with a different rhythm. I tried a few things but there is still work to do. The runs today were a little longer today but our speed was still good.”

Marquez was 12th fastest on the final day of testing, while his next outing will be in Qatar on 22 February.