KTM RC16 upgrades ‘what we were missing’ declares Espargaro

Spaniard samples a number of components in three-day Sepang test. 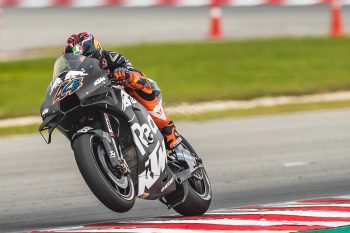 Pol Espargaro says the upgrades made to the 2020 KTM RC16’s engine and electronics are what he was previously missing after a positive outing at the Sepang test.

The Red Bull KTM Factory Racing rider tested an extensive amount of components to the engine, electronics and chassis, while he also concentrated on different swingarms and the new Michelin tyre allocation.

The Spaniard went 8-8-7 on the timesheets across the three days, leaving Espargaro with a strong mindset as the season-opener approaches.

“We’ve done a lot these six days,” Espargaro stated. “Today was successful – we tested the new Michelin tyres and we made our conclusions. We also worked on the swingarm because we felt we were losing grip in hot conditions from the soft tyres so we wanted to understand why.

“We learned a lot actually. We have more horsepower and the electronics are working smoother which allows you to open the throttle earlier in the corners and is important here in Sepang and what we were missing before.

“Overall it feels very good. In Qatar we will restart. We might have different problems and we’ll have different tyres so we’ll begin again and hopefully have the same results.”