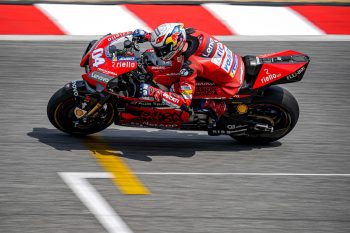 Mission Winnow Ducati Team’s Andrea Dovizioso has revealed he was forced to adapt his riding style to the new Michelin tyre that was rolled out at the Sepang test.

The Italian admitted he initially struggled to tweak the way he riders, ultimately winding up 14th on the timesheets during the third and final day of testing.

“I am quite satisfied with the work we have done today,” said Dovizioso. “This morning we were able to put in several laps, improving the bike setup and also my feeling with the new tyres. It had not been easy because I had to adapt my riding style, and I was struggling a lot with this in the beginning.

“Danilo and I did a few laps together – the pace was good, but the tyre performance dropped quite a lot. We still need to understand how they will work on a race distance and here in Sepang, where the conditions are peculiar due to the high temperatures, is really difficult to make a complete evaluation.

“Now we still have a test before the opening round of the season in Qatar. I am sure that the final classification of these three days doesn’t completely reflect what will happen in the championship this year.”