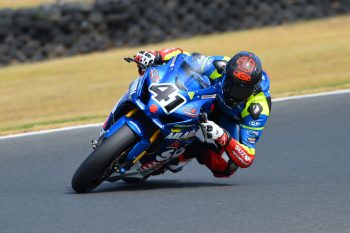 The 21-year-old crashed while testing at the New South Wales’ venue last year, where he was air-lifted to hospital after suffering a badly-broken right hand, wrist and clavicle in two places, as well as lacerations to his small finger that had to be operated on.

Croker returned to riding in the later months of 2019 in preparation for this season, the number 41 most recently participating in the official two-day test at Phillip Island.

“It was a positive two-day test for the team gathering a lot of information,” said Croker. “Although my hand and wrist held us back from track time we still managed to find a good direction with the setup of the bike.

“It was great to be back in the paddock after such a long break and I’m really looking forward to round one in just a few weeks time. We’d like to thank our sponsors and now look forward to the first round of the ASBK in conjunction with WorldSBK at Phillip Island next month.”

The opening round of the ASBK will run in conjunction with the round one of the Motul FIM Superbike World Championship (WorldSBK) on 28 February-1 March.