Garcia the fastest amongst the Moto3 grid in Spain. 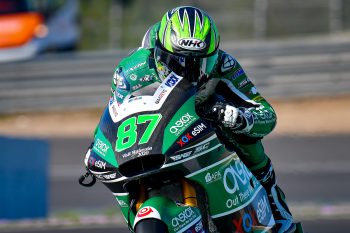 2020 is up and running in Moto2 and Moto3 and it was Remy Gardner (Onexox TKKR SAG Team) who ended day one at the official Jerez test as the man to beat in the intermediate class, with Sergio Garcia (Estrella Galicia 0,0) taking the honour in the lightweight class.

In Moto2, Gardner set his scorching 1m40.848s in the final session of the day to top the timesheets, with an impressive Enea Bastianini (Italtrans Racing Team) slotting into second but 0.269s down. Perennial title challenger Tom Luthi (Liqui Moly Intact GP) was the only other rider to get within half a second of Gardner, taking P3.

Behind the quickest trio came reigning FIM CEV Moto2 European champion Edgar Pons (Federal Oil Gresini Moto2) to make it a Kalex top four lockout, the Spaniard sitting 0.587s off Gardner. After an impressive private test, rookie Aron Canet (Aspar Team) began the Official Test in fine form too as the Spaniard finished P5 on day one with a 1m41.439s – the top Speed Up and rookie.

Red Bull KTM Ajo’s Tetsuta Nagashima, who gets on the team’s new Kalex chassis with previous experience, was fifth, ahead of an impressive first run out for MV Agusta Forward Racing’s Simone Corsi, with the Italian veteran less than half a tenth off Nagashima, in P7. The second-fastest Speed Up on day one was 2019 Jerez podium finisher Jorge Navarro (Speed Up Racing) in P8, with Xavi Vierge (Petronas Sprinta Racing) splitting Navarro from his teammate Fabio Di Giannantonio, who was 10th.

Navarro is also the man whose pole lap from 2019 is the lap record time Gardner beat on day one, so there’s likely plenty to come from the field yet. But it was nevertheless a competitive start to the season for the intermediate class, with under two seconds splitting the top 25 riders.

In Moto3, it was Sergio Garcia who picked up where he left off in 2019. The Valencia GP winner topped the timesheets on Wednesday, although it wasn’t by much – with Petronas Sprinta Racing’s John McPhee just 0.060 in arrears. Ai Ogura (Honda Team Asia) impressed to complete the top three, another tenth and a half back.

2019 Jerez winner Niccolo Antonelli (SIC58 Squadra Corse) was fourth fastest overall, although he was just 0.011s ahead of Gabriel Rodrigo (Kommerling Gresini Moto3), the man who broke the lap record in private testing last week. Tatsuki Suzuki (SIC58 Squadra Corse) took P6, ahead of Jaume Masia (Leopard Racing) in seventh as the Spaniard seems to have quickly settled into life on the Honda.

The top KTM rider on day one was Albert Arenas (Aspar Team) just behind Masia, with Filip Salac (Rivacold Snipers Team) in P9 after a noteworthy day on the timesheets for the Czech rider.

Noteworthy was also apt for the man in 10th – Romano Fenati (Sterilgarda Max Racing Team). The veteran Italian was fastest Husqvarna on Wednesday as the marque return to Moto3 competition, making it all three manufacturers in the top 10 as 2020 begins. 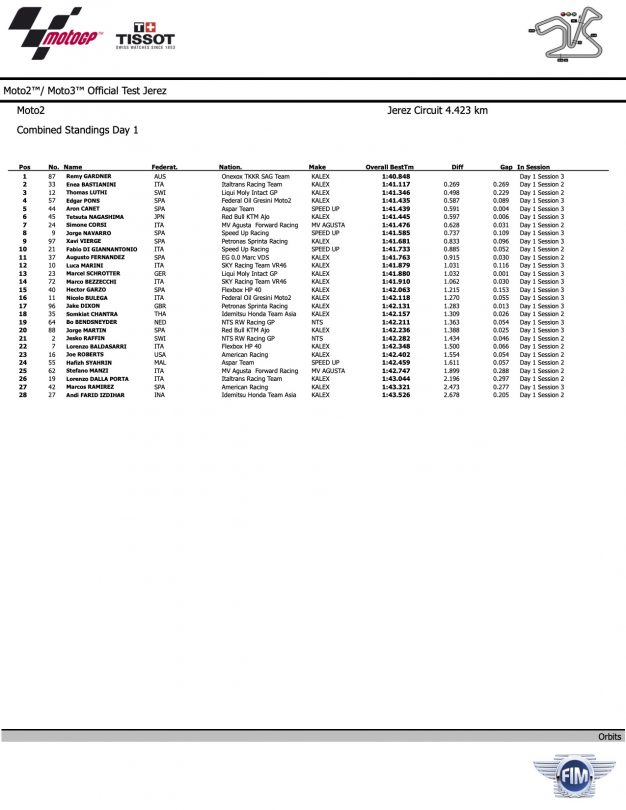 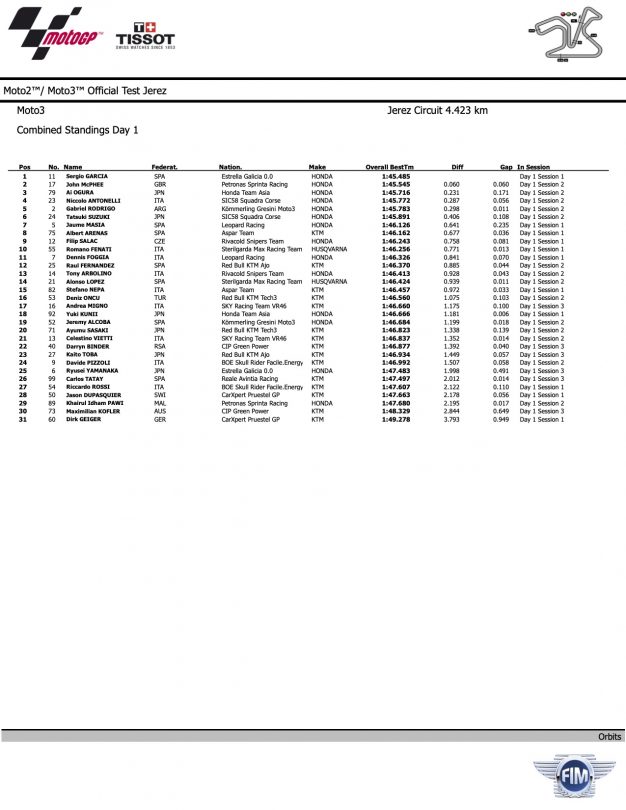