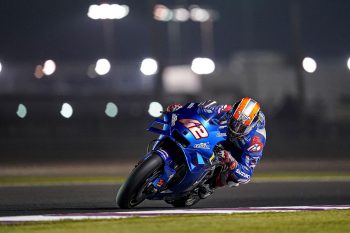 Team Suzuki Ecstar struck back in Qatar on day one of MotoGP testing as Alex Rins led teammate Joan Mir to lock out the top two positions on the time-sheets.

While the 1m54.462s of Rins was 0.002s ahead of Mir, Maverick Vinales (Monster Energy Yamaha MotoGP) was third overall on Saturday.

Team Suzuki Ecstar Team Manager Davide Brivio confirmed that there’s nothing new to test in Qatar, but after success at Sepang it’s looking good for the Hamamatsu factory. Their engine choice is also clear as they switch their main focus to back-to-back chassis testing.

At Yamaha, the 2020 engine also seems to be set in stone and the factory riders of Vinales and Valentino Rossi (Monster Energy Yamaha MotoGP) have the holeshot devices fitted, with the quartet of Yamaha riders confirming parts and electronics work on a different circuit.

Sepang test pace-setter Fabio Quartararo tried the holeshot device on Saturday and was pretty positive about it, finishing P8 with a best time of 1m55.204s and working more on his race rhythm. Teammate Franco Morbidelli finished fifth, with all four Yamahas finishing inside the top eight as Rossi slotted into P7.

Arguably the biggest talking point on day one was the rumoured ride-height adjuster that was predominantly seen on Jack Miller’s Pramac Racing GP20. Ducati team manager Davide Tardozzi admitted they have ‘something’ new they are trying, but wouldn’t say much else.

Other than that, the goal for the Borgo Panigale factory was to work more on Michelin’s new tyre, something that both Andrea Dovizioso and teammate Danilo Petrucci put time into at the Sepang test. Right at the end of the opening day, Petrux leapfrogged to fourth to sit just 0.172s off top spot.

Pramac Racing’s Francesco Bagnaia was ninth after getting another 56 laps under his belt on the GP20, with Dovizioso (P11), Johann Zarco (Reale Avinita Racing) – another solid outing for the Frenchman in 12th – and Miller in 13th all within a second of the Suzukis.

At Honda, fresh of the back of a new four-year HRC deal, Marc Marquez got a valuable 42 laps under his belt as he continued to recover from shoulder surgery, finishing sixth on the time-sheets. He cited improvements in front graining compared to 2019 here, but lamented compromises in other areas.

Teammate Alex Marquez didn’t have the smoothest day as the reigning Moto2 world champion crashed twice, at turn seven and turn 10, but another 57 laps for the rookie was important after impressing at Sepang. The number 73 was on track with a new front fairing too.

Cal Crutchlow (LCR Honda Castrol) had another busy day of testing, the British rider completing 50 laps and finishing up in 19th. Takaaki Nakagami (LCR Honda Idemitsu) was 15th as he – like Marquez – comes back from shoulder surgery, and he confirmed he’s still struggling with endurance.

Aleix Espargaro and Aprilia Racing Team Gresini’s main target on day one, meanwhile, was to continue setting up the new RS-GP, and the Spaniard was joined on track by test rider Bradley Smith in the team’s 2020 colours. Espargaro was 10th, with Smith putting 54 laps on the board for Aprilia.

Finally, at KTM, chassis comparisons were ongoing in the factory camp, as well as a workout for the new swingarm we saw appear at Sepang. Pol Espargaro (Red Bull KTM Factory Racing) was the leading orange machine in P14, 0.987s off Rins’ time and at a track that’s tough for them.

New teammate Brad Binder was just a couple of tenths behind and the fastest rookie as he continued to adapt and he said it was almost like learning a whole new track initially, with a marked difference between the intermediate and premier classes at Losail. 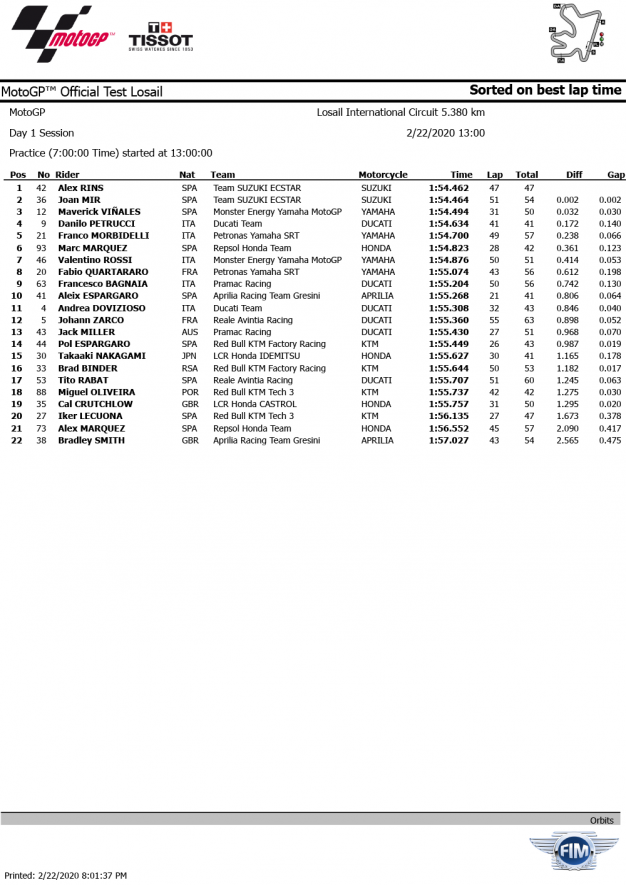