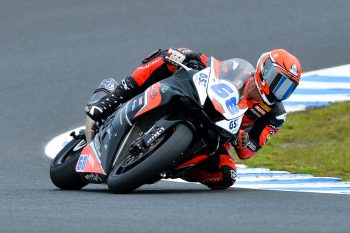 Australian wildcard Oli Bayliss has described his maiden WorldSSP test as positive after he set a personal best lap-time at Phillip Island, the youthful talent set to make his world championship debut this weekend at the season-opener.

Bayliss, who will take on double-duties at the Island as he contests both WorldSSP and Australian Supersport, went 16-19 on the timesheets across both days of testing this week, setting a 1m36.010s lap on Tuesday’s final hit-out before the weekend.

“It wasn’t such a bad day to be honest,” Bayliss reflected. “The first session this morning went well for the team and I. We again went faster than what we did yesterday, which was positive, as it was the fastest which I have ever been around the Phillip Island Grand Prix Circuit.

“We kept on doing more and more laps to get used to the Cube Racing Yamaha YZF-R6 to get as ready as we can possibly be ahead of the start of the round on Friday. I feel good and I feel like we are improving. The extra track time which I’ll get in the Australian Supersport Championship will definitely help me, in terms of track time that’s for sure.

“To finish 20th overall in the combined times, I’m okay with that. The positives which we can draw out of the two days is the fact that we have gone the fastest around this track than we have done before on a bike which is not quite where we want it to be just yet.

“We as a team can see that the bike needs a bit of improving. I really need to go a second quicker and I should be closer to the top 10. I’ll keep working towards that target.”

The 16-year-old will have 11 sessions to complete – including four races – at the Island this weekend across the two championships.