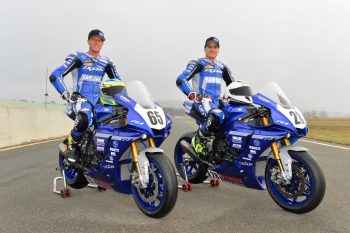 Wagner not only won the corresponding round in 2019, he simply dominated taking all three race wins on the weekend to kick off his championship tilt in perfect fashion. Unfortunately, a fall leading up to round two halted his 2019 campaign.

But, despite another injury leading into this weekend, Wagner has recovered well and is expected to be on the pace when the lights go green at Phillip Island this weekend. He has gelled quickly with the YRT R1M and his experience around the Phillip Island circuit will hold him in good stead come race team.

“I did some damage to my thumb at the official test here at Phillip Island a month ago, but I received some quick treatment from the RACESAFE crew, and I was able to ride within a couple of weeks at our YRT test. It felt pretty good then and with another two weeks of recovery, it feels good and I’m right to go.

“I’m excited to go racing and grateful for the opportunity to represent the Yamaha Racing Team. We had a shakedown of the 2020 bike, and I think we have a really good package this year. The transition from the bike I raced last year to the factory bike has been smooth and now its up to me to get the results,” Wagner ends.

For Halliday, the goal is simple. Be better than last year. Halliday was in championship contention right until the final round. He even lead the championship at stages throughout the year because of his consistent riding on all circuits.

Halliday was a podium regular in 2019 but acknowledges a couple of race wins sprinkled in with his constant podiums is what’s required to take the next step up in the championship and secure the number 1 plate for Yamaha.

“Last year, I proved that I could be consistent and stay on the bike and that was a goal coming into the season. This year, that goal remains in place, but I also need to grab some race wins when the opportunity presents itself.

“With the depth now in the ASBK, a race win is gold not just in terms of the points but also the confidence it brings.

“Let’s get the championship off to a good start this weekend and I can’t wait to get back into racing. The off season has been too long,” Halliday signs off.

Yamaha will not only have a contingent of riders competing in the domestic Supersport 600. Supersport 300 and bLU cRU Oceania Cup, but also the factory Pata Yamaha team challenging for the World Superbike Championship. On track action gets under on Friday with the main events held Saturday and Sunday.

Off track, there is a heap of activities and be sure to swing by the Yamaha stand for a full range of 2020 merchandise.