Hook ninth fastest as the testing concludes in Spain. 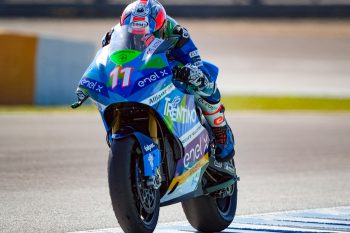 Reigning champion Matteo Ferrari (Trentino Gresini MotoE) has completed the final day of MotoE World Cup testing in Jerez by topping the timesheets, setting a best lap of 1m47.494s on the final day to head the combined timesheets.

At the end of the three days in Andalucia, the top eight were covered by just eight tenths and only 1.2 seconds split the top 14 as MotoE got off to a competitive start in 2020.

2019 Cup runner-up Bradley Smith (WithU Motorsport) was fourth fastest at the Circuito de Jerez-Angel Nieto, the British rider sitting 0.379s off Ferrari’s pace. Five riders managed to dip into the 1:47s and the last of those was Octo Pramac MotoE’s Alex De Angelis, the Sammarinese rider ending the test 0.450s from the top.

Throughout the official test the MotoE class were testing new tyres from Michelin, as well as new Ohlins forks and new airflow cooling for the batteries, which helps the Energica Ego Corsas charge quicker too.