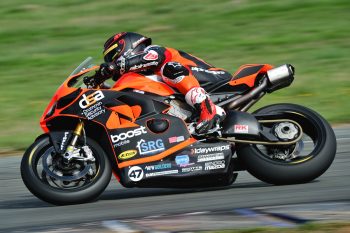 Points leader Wayne Maxwell says the unofficial ASBK test at Wakefield Park was initially a ‘challenging time’, however he was able to discover a setting that enabled him to set the pace.

The Boost Mobile Racing rider, who was untouchable at Phillip Island’s opener, set a 57.279s to top the times during the two days, where he edged out Cru Halliday (Yamaha Racing Team) for top spot.

The Ducati pilot was pleased to exit the New South Wales venue with a strong setting, admitting he was left scratching his head during the early stages of testing.

“Obviously Wakefield Park is on the complete opposite end of the scale to Phillip Island,” Maxwell told CycleOnline.com.au. “We had a test plan in mind – some of the stuff worked, some of it didn’t.

“It was probably the most challenging time I’ve had and it left me scratching my head, but full credit to the Boost Mobile Racing team – we stuck to the plan and came out with the result that we set out to achieve.

“Wakefield is a circuit I’ve never won an overall at, so I’d be keen to win an overall there. Troy’s [Herfoss] is so good there and Cru [Halliday] is in great form and he’s really good at Wakefield, so I think we’ll have a great race between the three of us and the competitive ASBK field.”

Former EWC regular Broc Parkes was third on the timesheets filling in for Aiden Wagner at Yamaha Racing Team, while the top five was completed by Troy Herfoss (Penrite Honda Racing) and Glenn Allerton (Maxima BMW). Wakefield Park’s second round is scheduled for 27-29 March.