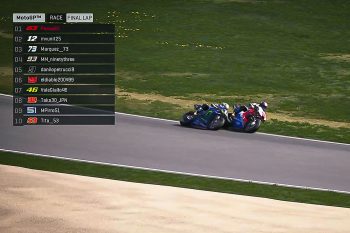 Bagnaia and Vinales went toe-to-toe, with the Italian taking a debut MotoGP ‘win’ after diving up the inside of Vinales on the grass on the last lap.

The second ‘Stay At Home GP’ was filled with yet more thrills and spills as 10 premier class riders again put on a show to bring a little light relief and entertainment to a tougher time for many MotoGP fans around the world – with more than 20 households connected up behind the scenes to make it a reality.

Sixth place was another tight fight and went right down to the wire as Valentino Rossi (Monster Energy Yamaha MotoGP) and Danilo Petrucci (Ducati Team), both making their virtual race debuts, battled it out. In the end, Petrucci came out on top despite The Doctor’s best efforts after the number 46 put in an almighty lunge at the final corner.

LCR Honda Idemitsu’s Takaaki Nakagami slipped back to eighth after a few more exploits, making no friends on the virtual track in this race, but providing some top entertainment, with Ducati Team’s Michele Pirro and Reale Avintia Racing’s Tito Rabat completing the top 10.