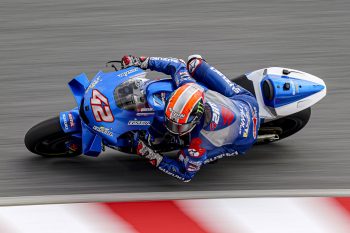 Team Suzuki Ecstar has secured Alex Rins through the 2022 MotoGP season after the Spaniard signed a two-year extension with the factory.

The 24-year-old joined Suzuki in 2017 upon debut in the premier class, remaining aboard the GSX-RR for another two years.

“My wish was to continue with Suzuki and finally this is what I did,” Rins said. “I believe that the project has the potential to be a winning one, I have the desire to win, and so we match perfectly. It’s the perfect place for me and we are working hard all together to get big results.

“I have always believed in the team and for this reason it was easy to get to the basic agreement very early on. Then we took some time to finalise the details and follow all the internal processes.

“Now we have to understand what’s going to happen with the 2020 season, we are ready to compete at the maximum level, as we already showed in the pre-season tests. In this very moment the whole world is facing an unexpected situation that affects pretty much all countries and we need to be patient and see how it evolves.”

Team manager Davide Brivio commented: “We are very happy to confirm Alex Rins as a factory rider of Team Suzuki MotoGP for two more seasons in 2021 and 2022. With this agreement we take our relationship to six years and we believe that this stability will prove positive for all of us.

“I must say that this agreement was just awaiting a stamp on it, because both Suzuki and Alex had the will to continue together and a basic agreement for the continuation was already achieved months ago. So now that everything is done we can finally proudly announce it.”

Rins’ first year was marked by a severe injury at the beginning of the season, but he recovered strongly and didn’t take long to show his true potential with consistent races in the second half of the year. He built on his experience in 2018 to take his first MotoGP podium in Argentina with third place.

The 2019 season rightfully placed him among the top championship contenders, with consistent race results in the top five and two outstanding victories at the Americas GP and in Silverstone.