Queenslander Cameron Swain may be the youngest competitor in the Mi-Bike Australian Superbike Championship (ASBK), but he’s battling with the bLU cRU Oceania Junior Cup (OJC) front-runners and has big plans for the future.

The talented 11-year-old from Warner may be relatively new to road racing, however, he has already made an impact by being in the mix at Phillip Island’s opening round by finishing sixth overall in Victoria.

In his first OJC race, Swain diced with the leaders, crossing the line in sixth place and only 4.532 seconds behind the winner, Lucas Quinn, who went on to win all three races over the weekend. In race two, Swain placed fourth, only 0.203s behind the leader in a pack of 11 riders battling for the win, then Swain was eighth in the final encounter, just 0.294s outside of victory. 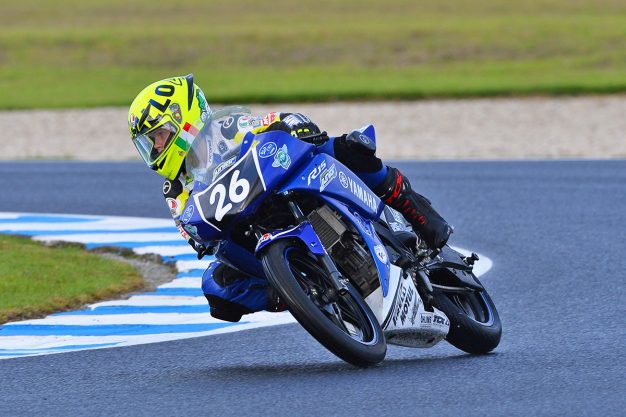 Having raced against some of his OJC competitors at a round of the Victorian Road Racing Championship in late 2019, Swain was very happy with his first hit-out in the Oceania Junior Cup in front of the Motul Superbike World Championship (WorldSBK) crowd.

“My first bike was a Yamaha PW50 when I was four years old,” Swain explained. “Dad took me out to this little paddock, but it was really gravelly and I had a crash and I was took scared to get on the PW again until I was seven. One of my friends came across the road and saw the bike and said can he have a go on it. When I saw him riding it, I wanted to go out and have a go and from there I’ve been riding every day after school.”

Swain quickly mastered the PW50 before moving onto a KTM 50 SX and riding at Queensland Moto Park and Caboolture Friday Night Bikes with his dad and friends.

“It was fun and casual,” he continued. “As I got faster, I was getting more confidence,” Swain said. “We got a KTM 65 and I started getting really fast and dad said one day if I wanted to have a go on at road racing and I said ‘is there such a thing as that?’. I was eight years old.

“My first go was a Honda NSF100 and after that day I said to dad that it was the best day of my life and I kept on bugging him can we go back. After that we brought a Metrakit 80 and I was pretty nervous as it was a two-stroke race bike, but as I was getting better and better, I started going faster.”

Swain attended a practice day at North Coast Road Racers at Grafton and was fast out of the gate, later upgrading to a Kayo 150 and he joined the MotoStars Racing Series, taking out third place in his first year. 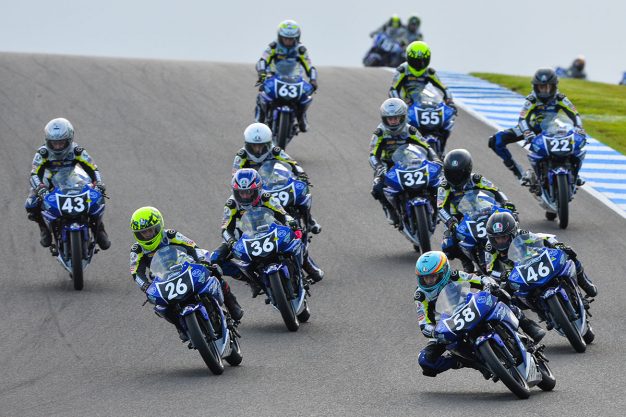 He purchased Honda NSF 100, which although slower than the Kayo, actually helped him with his corner entry and exit speeds as he had to push harder to keep up with the other riders which then launched him into the OJC. While racing is now a normal part of life for Swain, his school friends have mixed views on how hard it is.

“My friends normally say it’s pretty cool, but a lot of the kids say motorbike racing isn’t a sport and you are just sitting on a seat and that they could beat me [laughs],” Swain said.

With COVID-19 restrictions, Swain hasn’t stood still and continues to training every day, but is desperately itching to get back racing: “It’s all I think about and obviously when we get back, I’d like to get a top three or at least a top five for the year.

“Training, I just go out for mountain bike rides all the time, but it’s pretty boring not getting to ride my motorbike. I do weights and a little bit of running and skipping, but find running is a little boring and I also do online training as well.”

Swain has big dreams and plans for the future and is determined to make them a reality: “Long term goal is MotoGP, I want to get there one day, but first another year in OJC as I’m too young to do 300s. Year after that we will do ASBK 300s, try for Asia Talent Cup selection and see where we go from there.”