Japanese grand prix the latest flyaway to be cancelled by organisers. 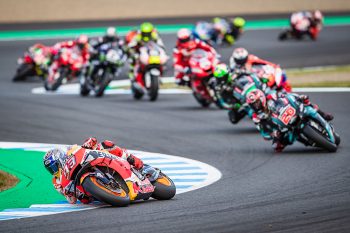 MotoGP won’t travel to Japan for a round during the 2020 world championship, with Motegi the latest round to be cancelled due to COVID-19.

The Japanese grand prix was scheduled to take place between 16-18 October and has been a staple on the calendar since 1999.

“It is with great sadness that we announce the cancellation of the Motul Grand Prix of Japan at the very unique Motegi circuit, meaning we will not have a Japanese Grand Prix on the calendar for the first time since 1986,” commented Carmelo Ezpeleta, CEO of Dorna Sports.

“The MotoGP family is working very hard to be able to re-start the racing season and hold as many events as possible, and in the safest way possible. For this reason, the FIM and Dorna, in consultation with IRTA and MSMA, have decided that, until mid-November, MotoGP will remain in Europe to do as many European MotoGP events as we are able to.

“I very much thank Mobilityland for the support given to MotoGP. On behalf of Dorna, I would also like to thank all the fans for their understanding and patience as we wait for the situation to improve. We very much look forward to returning to Motegi next year.”

Reports suggest that if flyaways do in fact go ahead following mid-November, both Malaysia and Thailand appear to be the most likely rounds that will go ahead. The only other potential – but unlikely – options remain the United States and Argentina.