Honda’s three MotoGP machines – the RC211V, RC212V and RC213V – have won more races and titles than any other manufacturer. It’s all about combining Honda engineering with the best rider talent. During the 18 seasons since MotoGP went four-stroke in 2002, Honda has won 22 riders and constructors world championships and achieved 153 victories. The RC211V, RC212V and RC213V continue the naming system Honda used with its first GP bikes that took the world championships by storm in the 1960s. RC stands for Racing Cycle, the 211 indicates that the RC211V was Honda’s first GP bike of the 21st century and the V refers to the vee configuration of the five-cylinder engine. The 212 was Honda’s second GP bike of the 21st century and the 213 the third. 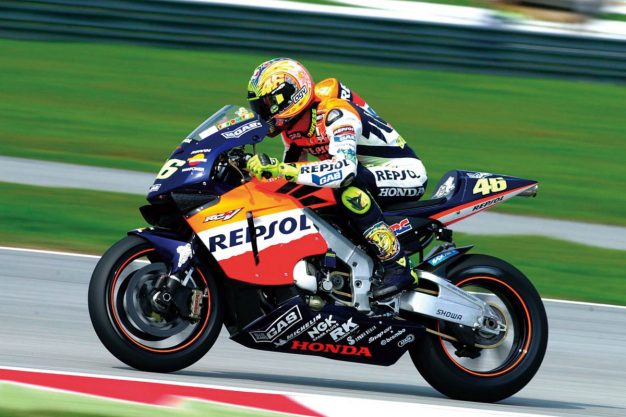 3: RC211V (2002-2006):
When MotoGP went four-stroke in 2002 Honda took the opportunity to build a remarkable motorcycle that is still revered throughout the MotoGP paddock and beyond. The RC211V was an inspired design. The five-cylinder vee engine delivered superb rider-friendly performance, while its compact design allowed the construction of a chassis that gave riders real confidence when they attacked corners. This allowed numerous riders to get the maximum out of the RC211V. Ten RC211V riders – Alex Barros, Max Biaggi, Toni Elias, Sete Gibernau, Nicky Hayden, Marco Melandri, Dani Pedrosa, Valentino Rossi, Makoto Tamada and Tohru Ukawa – won a total of 48 races during MotoGP’s five-year 990cc era from 2002 to 2006. The bike also won three riders titles and four constructors titles during that period. The RC211V used a 75.5-degree vee engine with three cylinders in the front bank and two in the rear. Some of its concepts came from previous Honda GP bikes and some from Honda street machines – proving that technology flows both ways at Honda. The big-bang firing configuration, which delivers torque to the rear tyre in a more useable way, came from Honda’s NSR500, which utterly dominated the final years of the 500cc world championship following Honda’s introduction of the big-bang concept in 1992. The RC211V’s cylinder design borrowed heavily from lessons Honda had learned from its V4 RC45 street bike, winner of the 1997 Superbike World Championship. The two engines shared very similar combustion chamber design, as well as bore and stroke measurements. At first the RC211V was in a relatively low state of tune, making around 220 horsepower. The fastest bike of the inaugural MotoGP season was Ukawa’s RC211V, which reached 324.5km/h at Mugello in June 2002. Power had increased significantly by the final 990cc season of 2006, when the fastest bike was Casey Stoner’s RC211V, reaching 334km/h at Mugello. Honda’s first MotoGP chassis was certainly the equal of its first MotoGP engine. The crucial idea behind the chassis design was mass centralisation. This entailed concentrating maximum mass around the centre of the motorcycle to improve handling, steering and overall manageability. An important aspect of this concept was relocating the fuel tank. The RC211V’s unorthodox design carried a third of its fuel beneath the rider, to bring the fuel load closer to the centre of the bike. Riders found this a particular advantage in the early stages of races, when previously they had struggled with so much fuel carried so high in the bike. HRC estimated that whereas the NSR500 was at 70 percent of its performance potential in the early laps the RC211V was at 80 to 90 percent. Apart from the easy-going chassis, what made the RC211V so good at going fast over full race distance, with new tyres, then with used tyres, was its flat, friendly torque curve. This allowed riders to spin the rear tyre and maintain control, because when rpm increased torque didn’t, so the tyre regained grip without any drama. After Rossi won the RC211V’s first riders titles in 2002 and 2003 Honda’s strongest rider was young American Nicky Hayden, who joined the Repsol Honda squad in 2003, after winning the 2002 AMA Superbike title aboard a Honda VTR1000. Hayden’s riding technique – learned on American dirt tracks – was to ride the bike loose, using wheelspin to help him steer the motorcycle. No wonder he adored the RC211V. Hayden won the 2006 MotoGP title at the final round, in one of the most dramatic days in grand prix history. Memories of Hayden, the RC211V and that day at Valencia will live forever. 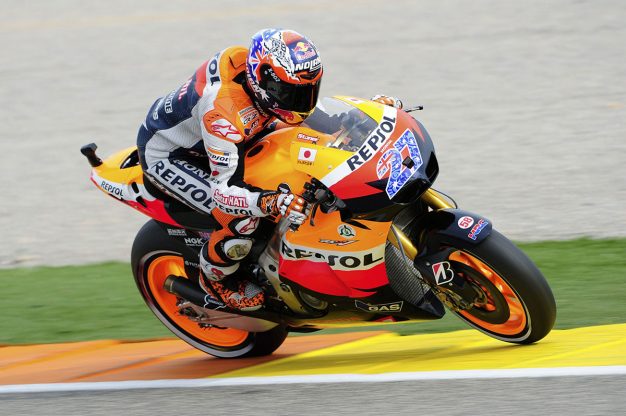 2. RC212V (2007-2011):
MotoGP’s technical regulations were rewritten for the 2007 season, reducing engine capacity from 990cc to 800cc. Thus HRC went back to work, creating a new machine for the second MotoGP era. The RC212V employed many of the lessons learned from the RC211V, but was an all-new motorcycle, powered by a V4 engine. Once the 2007 season was underway it quickly became obvious that the 800s were very different machines from the 990s. The smaller engines produced less power and torque, so the bikes demanded a different riding style, prioritising high corner speed over sideways corner exits. The narrow-angle V4 revved past 18,000rpm, 2000rpm more than its larger-capacity predecessor, using pneumatic valve springs for better valve control at high rpm. The steeper power curve of the 800s also demanded better electronic rider controls, including anti-wheelie, traction control and launch control. Evolution of electronics was the most significant development during the 800cc era. Remarkably, the 800s immediately recorded faster lap times than the 990s at most tracks, their greater speed through the corners more than compensating for a slight reduction in acceleration and top speed. Even at super-fast Mugello, where Pedrosa’s RC212V hit 317.6km/h, his fastest lap was only 0.037 seconds slower than the 990cc lap record. The RC212V wasn’t an instant success like the RC211V. The machine demanded a huge amount of input from HRC engineers, who learned much from their work on engine, chassis and electronics. However, over time it too became a championship winning machine. The challenge was to create rider-friendly horsepower, despite the peakier power delivery of the smaller engine. More than ever this goal was reached by blending engine performance with electronic performance. During the later stages of the 800c era Honda introduced two important technologies from the company’s Formula 1 car programme. In 2010 came the torque sensor, mounted on the gearbox output shaft. This so-called torductor measured power delivery to the rear tyre, which the electronics refined in real time to help riders use maximum power at all times. The following year came the seamless gearbox, which allowed faster, smoother gear changes. This gave a small advantage in a straight-line acceleration and a much greater advantage during cornering, because riders could change gears at high lean angles, which had previously been risky. The RC212V’s seamless gearbox perfectly illustrated Honda’s engineering genius. Similar gearboxes had been used in F1 cars for some while, but no one had attempted to cram all that technology into a motorcycle-size gearbox. Honda’s first MotoGP seamless unit was like a watch inside. HRC also tried myriad different chassis concepts with the RC212V, working to find the best compromise between low-speed turning and high-speed stability. Engineers started with a conventional aluminium frame, fabricated with CNC-machined sections, then tried a carbon-fibre/aluminium composite in 2010, at the same time switching to Ohlins suspension. When Casey Stoner took the 2011 MotoGP title aboard his RC212V he used an all-aluminium frame. The improvement in performance during the five-year 800cc era was as impressive as it had been during the 990 years. At Mugello in 2011 the 800s were almost two seconds a lap faster than the 990s had been during the 2006 Italian GP. 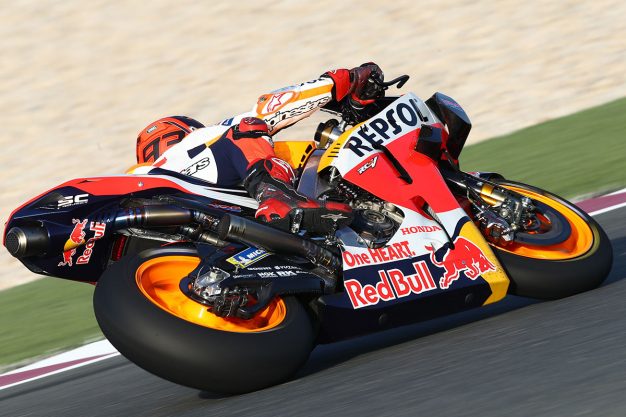 1. RC213V (2012-present):
When the decision was taken to move to full 1000cc machines for the 2012 MotoGP World Championship Honda engineers designed their third brand-new MotoGP machine. Once again, the bike was created through the knowhow learned from previous machines, and once again it was very different. Honda didn’t simply enlarge engine capacity. The company decided to make a clean break from the RC212V, building an all-new, wider-angle, 90-degree V4. The RC213V wasn’t the first 90-degree V4 that Honda had built. The oval-piston NR500 of the early 1980s was powered by a 90-degree V4, as were the VF750, VFR750, RC30 and RC45 street bikes of the 1980s and 1990s. A 90-degree V4 isn’t as compact as a narrower-angle vee, but Honda decided the engine’s advantages would outweigh the disadvantages, so long as they worked tirelessly on frame, air-box, exhaust and fuel tank design to reduce overall dimensions. The big advantages of a 90-degree V4 is its perfect primary balance, which makes it smoother and more robust and therefore easier to tune, especially when engineers want to experiment with different big-bang firing configurations to give the best kind of power and torque. When the 1000s first raced at Mugello in 2012, Dani Pedrosa and his RC213V lapped 4.9 seconds faster than the 2002 MotoGP record and reached 342.9km/h on the main straight, 18.4km/h faster than the first RC211V. These figures illustrate the progress made not only in straight-line performance but in overall performance, through improvements in all aspects of chassis design and electronics engineering. The second year of the 1000s commenced the dominant relationship of modern MotoGP – the RC213V and Marc Marquez. In 2013, the RC213V helped the young Spaniard became the first rookie premier-class champion since ‘King’ Kenny Roberts took the 1978 world title. From the beginning, Marquez had the ability to squeeze more speed out of the RC213V than anyone else. His all-action riding technique allowed him to take full advantage of the bike’s impressive braking stability, which is where he made much of his time over rivals. In 2014 Marquez was even stronger, winning 13 of 18 races, equalling the all-time season record of Mick Doohan, achieved with Honda’s NSR500 in 1997. In 2015, although Marquez and Pedrosa won seven races between themselves, the championship title eluded Honda. This was a temporary set back as Honda learned much from that defeat and with Marquez have won every riders and constructors title since. In 2016 MotoGP underwent another major rules rewrite – Bridgestone tyres were replaced by Michelins and factory-made electronics were replaced by spec hardware and software, so the entire grid used the same electronic rider controls. These changes demanded a huge amount of work from HRC engineers. MotoGP’s lower-tech spec electronics weren’t so effective, so engine performance had to be softened. The RC213V engine underwent several major redesigns over the next few years, changing the direction of crankshaft rotation and changing the firing configuration to make power delivery more manageable in the absence of Honda’s hi-tech traction-control and anti-wheelie software. Aerodynamics also became a much bigger factor in MotoGP, with new aero designs increasing downforce at the front of the RC213V to further reduce wheelies. Marquez proved to be the master of adapting to all these different technologies. In 2019 the former 125cc and Moto2 World Champion scored an impressive nine wins, thanks partly to another major engine redesign that gave a significant horsepower boost. At Mugello 2019 the fastest RC213V belonged to LCR Castrol Honda rider Cal Crutchlow at 354.7km/h, an improvement of 30.2km/h over the first RC211V. Marquez didn’t quite win the 2019 Italian GP – he took the flag 0.04 seconds behind local Danilo Petrucci, but it’s worth comparing their race time to MotoGP’s inaugural season. The 2019 Mugello race was two minutes and seven seconds faster than the 2002 event! Marquez ended 2019 with victory at the season-ending Valencia Grand Prix. This was his 56th MotoGP success and the RC213V’s 81st during the eight years and 145 races of the 1000cc era. Other riders who have won races with the RC213V include Casey Stoner, Pedrosa, Crutchlow and Jack Miller. When MotoGP returns to action Marquez and his fellow RC213V riders Alex Marquez, Cal Crutchlow and Takaaki Nakagami will be pushing hard with their Honda engineers to take the RC213V towards 100 victories.