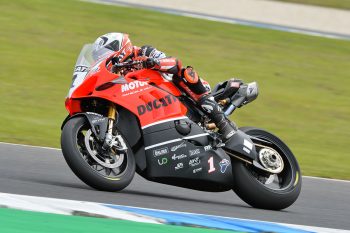 Ducati Australia will continue its factory support of DesmoSport Ducati in the Mi-Bike Australian Superbike Championship (ASBK) through the 2020 season.

Now a fully-owned subsidiary of Ducati, the iconic Italian brand has maintained its partnership with the team co-owned by Troy Bayliss and Ben Henry.

“Ducati has had a long and successful relationship with Troy,” commented Sergi Canovas, managing director of Ducati Australia. We are thrilled to continue this relationship in Australia as we support the DesmoSport Ducati Team to defend the Australian Superbike Championship.

“As we prepare to enter the Australian market with the fully-owned corporate subsidiary, we are proud to partner with those that share our passion of the brand and the race-track. We wish Mike Jones and the team the best of fortunes when racing resumes.”

Triple Superbike world champion Bayliss said it was significant to extend his longtime relationship with the Ducati brand. DesmoSport Ducati was initially formed in 2016 with backing from previous distributors, NF Importers.

“My relationship with Ducati is strong,” Bayliss said. “The brand, along with the family in Borgo Panigale, have supported me throughout my career and I am excited to once again partner with them for the season ahead. I am excited to go racing together and see a new chapter as a team owner along with Ben.”

Henry – a multiple ASBK champion team owner – added: “We’ve had a close relationship with Ducati since the team first went racing in 2016 and I’m happy to see that partnership reinforced with Ducati’s arrival in Australia.

“I want to thank Warren Fraser and Warren Lee for their support as we established the race team, and I’m really looking forward to working with Ducati as we move through this next phase and go racing again soon.”