Everything ‘fixed’ for Rossi to join Petronas Yamaha SRT

The Doctor set to sign with Sepang Racing Team from 2021 season. 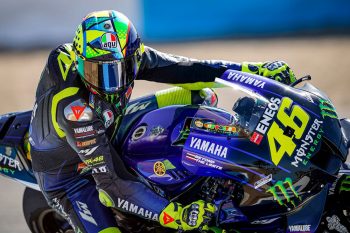 Nine-time world champion Valentino Rossi has confirmed that he intends to race-on in 2021 after agreeing to terms with Yamaha to join the Petronas-backed Sepang Racing Team.

In a direct trade with Monster Energy Yamaha-bound Fabio Quartararo, 41-year-old Rossi will extend his time in MotoGP aboard a factory-specification YZR-M1 at Petronas Yamaha SRT.

Rossi had been waiting to compete this year in a bid to decide if he would be in a position to continue next year, however, the COVID-19 pandemic has caused him to make that decision prior to this weekend’s opener at Jerez.

“For me the situation changed the plan a bit because I needed to race in 2020 to decide if I was going to race in 2021, to see if I can still be fast and competitive, but in the end I have to make my decision without racing,” Rossi explained.

“I spoke a lot with Yamaha and I want to continue. It’ll be a big effort because when you’re old you have to work very hard, but I want to be part of the game – also next year – and I already agreed with Yamaha and I spoke already with Petronas and everything is fixed.

“I haven’t signed the contract because it’s still not ready because we have to build the team and it depends very much if a lot of people will move from one team to the other because Fabio and I will switch position, but I think that we’ll fix it as soon as possible.”

After a spectacular rookie campaign last year, French sensation Quartararo has signed to join Maverick Vinales in the official Yamaha team from next season, while Franco Morbidelli recently re-signed with Sepang Racing Team to continue in the satellite Yamaha squad.