Top five position on the grid for Miller despite late crash in Q2. 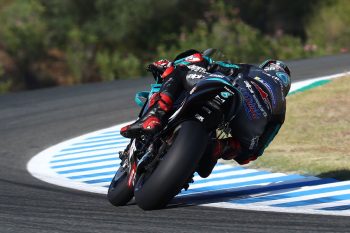 Petronas Yamaha SRT’s Fabio Quartararo won a three-way fight for supremacy in MotoGP qualifying at the Red Bull Grand Prix of Spain with a record lap at Jerez.

The Frenchman came out on top to beat Maverick Vinales (Monster Energy Yamaha MotoGP) and Marc Marquez (Repsol Honda Team) to the first pole of the year.

Marquez was the first man to attack the 55-degree track temperature, but his opening lap was marred by running wide at the Dani Pedrosa corner. Francesco Bagnaia (Pramac Racing), though, made no mistake on his first flyer, the Italian going provisional P1 before Quartararo put in a 1m37.064s.

Spurred on by his opening lap mistake, the number 93 of Marquez wasn’t hanging about on his second lap and then snatched P1 from Quartararo with a 1m37.006s. Quartararo bit back immediately with the first sub-1m37s lap of Q2 though, recording a 1m36.993s.

Out before his rivals on run number two, Marquez was on song and posted a 1m36.877s to depose Quartararo as the duo duelled for pole. Then, despite being nearly two tenths shy of Marquez’s time coming into the last split, Vinales had a mega final sector and demoted Marquez to take over in provisional pole.

In the meantime, there was fast crashes for Jack Miller (Pramac Racing) and Alex Rins (Team Suzuki Ecstar) – the fastest man in Q1 – at turn 11, with Andrea Dovizioso (Ducati Team) also going down at turn two to add some more drama. The crash resulted in injury for Rins and he’s now unfit for the weekend with a dislocated shoulder.

Quartararo showed he was the king of qualifying in Jerez for the second year in a row. ‘El Diablo’ was 0.194s under through the third split and pretty much held it to the line to lay down the gauntlet, taking the maiden MotoGP pole position of 2020. Vinales made it a Yamaha 1-2 ahead of Marquez.

Bagnaia continued his good weekend form into Saturday afternoon to earn his best-ever MotoGP qualifying result in fourth and the Italian will start one place ahead of teammate Miller after the Australian crashed on a provisional pole lap. Cal Crutchlow (LCR Honda Castrol) starts sixth.

After graduating from Q1, Pol Espargaro (Red Bull KTM Factory Racing) takes seventh on the grid and Dovizioso had to settle for eighth after his low-side. Rins qualified ninth, but will miss the race, with Franco Morbidelli (Petronas Yamaha SRT), Valentino Rossi (Monster Energy Yamaha MotoGP) and Team Suzuki Ecstar’s Joan Mir moving up a place.

In Moto2 it was Jorge Martin (Red Bull KTM Ajo) who stole the show, the Spaniard setting a 1m47.384s on his second flying lap to eventually beat Jorge Navarro (HDR Heidrun Speed Up) to pole position by 0.181s and Sam Lowes (EG 0,0 Marc VDS). Remy Gardner (SAG Racing) will start from P12.

No one has been able to stop Eric Granado (Avintia Esponsorama Racing) so far in MotoE, as he set a 1m48.620s on his only flying lap to beat Lukas Tulovic (Tech3 E-Racing) by 0.191s, with Dominique Aegerter (Dynavolt Intact GP) in third. Josh Hook (Pramac MotoE) lines up in 13th. 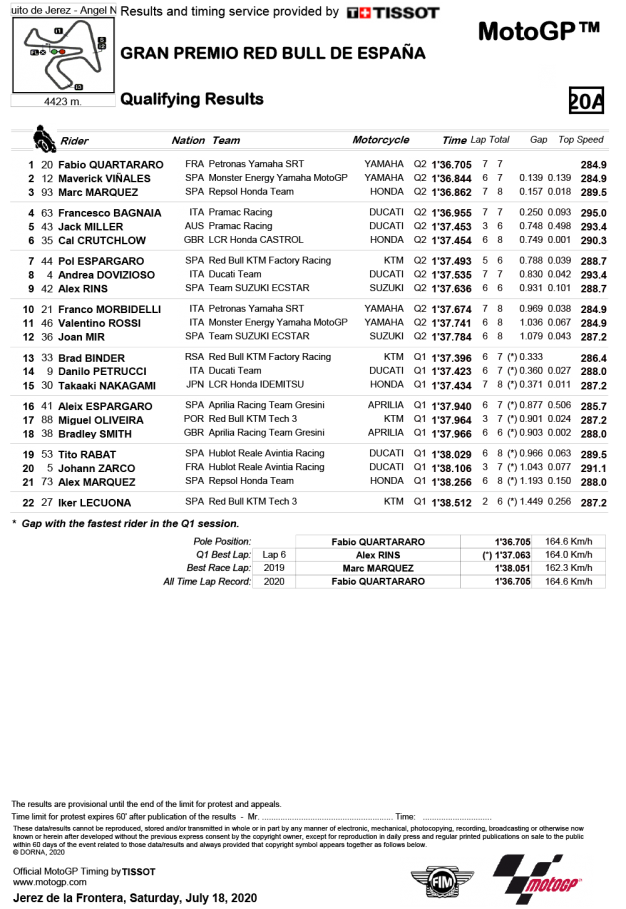 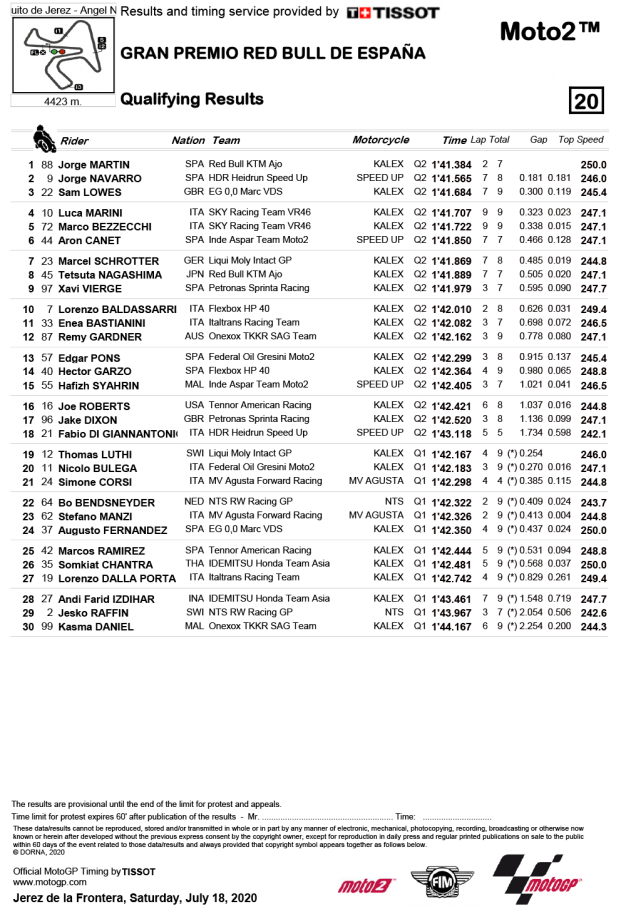 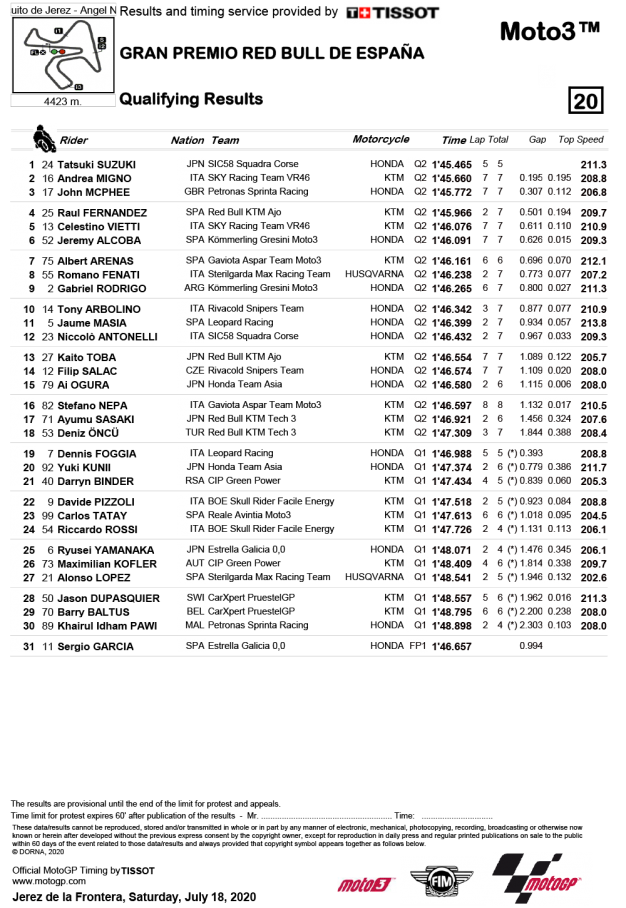 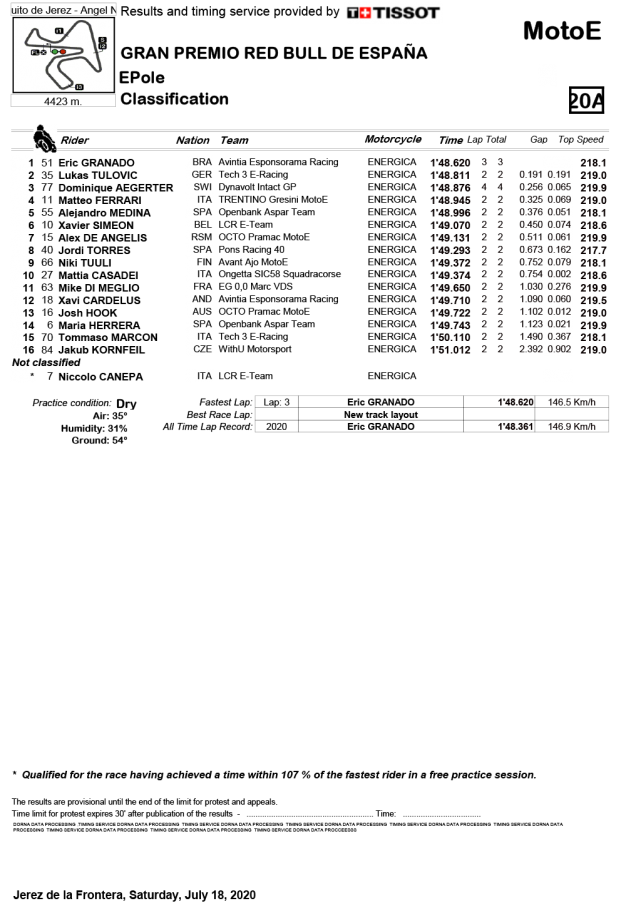