Quartararo breaks through as Marquez injured in MotoGP opener 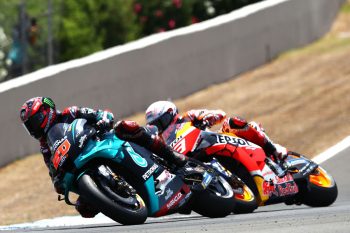 French star Fabio Quartararo has broken through for his first-career victory as the 2020 MotoGP World Championship opened with the Red Bull Grand Prix of Spain at Jerez, in a race where defending champion Marc Marquez put in a heroic ride prior to crashing out.

It’s been confirmed that Repsol Honda’s Marquez sustained a broken arm in the incident and will undergo surgery, however, Petronas Yamaha SRT rider Quartararo was all class on his way to Sunday’s win – a first for the Sepang Racing Team.

Quartararo capitalised on a lap five mistake from early race leader Marquez as he ran off the circuit and he didn’t look back. We witnessed a stunning comeback from the number 93 after his mistake, unleashing unbelievable pace mid-race, but he then suffered a huge crash at turn four when in podium contention with four laps remaining, breaking his right humerus.

Meanwhile, Maverick Vinales (Monster Energy Yamaha MotoGP) put in an impressive performance to bank 20 points and take second in the wake of the drama, with Andrea Dovizioso (Ducati Team) completing the podium after a late lunge on Australia’s Jack Miller (Pramac Racing).

Vinales got a storming launch from the middle of the front row and grabbed the holeshot into turn one, with Miller getting his Ducati off the line like a rocket to initially go P2. The Australian was wide though which let Marquez come through into second after a fairly average getaway, with polesitter Quartararo slotting into third at turn two as he then got the better of Miller.

However, the Desmosedici grunt saw Miller get up the inside of Quartararo down into the Dani Pedrosa Corner, as Vinales got out the seat around turn eight in an early scare for the number 12. Francesco Bagnaia (Pramac Racing) was then past Quartararo on lap two as the Frenchman initially fell back, but he was back through at the final corner on that lap as Marquez and Vinales went toe-to-toe at turn four, before Marquez managed to make the move stick.

Lap five would prove a game-changer after, going through turn four, a miraculous save from the reigning champion was had. Somehow, the number 93 picked his HRC machine up from an almost certain crash and managed to keep it upright through the gravel, coming back on the track in 16th. A huge moment, but it was far from race over for Marquez.

At the front, Vinales was leading for a couple of laps, but Quartararo had got the better of Miller and was soon right on the tail-pipes of the Yamaha. A mistake at Pedrosa corner was then followed by another one heading into Lorenzo corner on lap nine after the pace had slowed into the 1m39s and, as Vinales went wide, Quartararo and Miller were through. Slightly further back, however, attentions we starting to turn to Marquez.

In just five laps, Marquez had managed to get himself from 16th to P10 and was lapping around a second quicker than most of the leading group. Lap 12 saw Marquez set a 1m38.3s – the fastest lap of the race – that was a good 0.4s faster than Quartararo. Lap 13 soon passed and doing the passing was Marquez. He’d got the better of Miguel Oliveira (Red Bull KTM Tech3) and a struggling Valentino Rossi (Monster Energy Yamaha MotoGP) to move up into eighth.

With 10 to go, Marquez was a second quicker than third-place Vinales and the reigning champion getting back into a podium position now seemed a formality rather than a possibility. With eight laps to go, Marquez was just two seconds away from the podium as he hunted and passed Franco Morbidelli (Petronas Yamaha SRT), Bagnaia and Dovizioso. Suddenly, Marquez had Miller and Vinales right in front of him.

Quartararo was over five seconds clear, but all eyes were on Marquez vs Miller. Six laps to go, turn 13 was Marquez’s chosen passing place on Miller, but the Australian bit straight back at turn one. A man on a mission, Marquez was straight back up the inside at turn two and made the move stick. Now, Vinales was next on the list.

Coming across the line with four laps remaining, Marquez was plotting his move into P2. However, there was about to be another twist and a vast one at that. Coming out of turn three, Marquez was launched off his RC213V in a vicious way. Tumbling heavily through the gravel, the reigning champion was taken to the medical centre and has a broken right humerus that will require surgery.

Back at the front, Quartararo crossed the line to take an incredible maiden MotoGP victory, making some history and converting some searing premier class pace into a winner’s trophy. Vinales was able to grind out a P2 despite struggling with his front tyre from early on and the battle for the final podium spot went down to the final lap. With two to go, Dovizioso made his move on Miller at turn six to hold third.

Morbidelli then almost crashed after colliding with Miller on the inside of the corner, which allowed Pol Espargaro (Red Bull KTM Factory Racing) through in fifth – the Spaniard in the fight all race – but Morbidelli would eventually get the better of him at the last corner, on the last lap. Vinales took second from Dovizioso, with Miller leading Morbidelli and Espargaro over the line. Second through sixth were covered by just 2.3s.

Bagnaia couldn’t keep up the pace in the latter stages as the Italian slipped out of contention and finished seventh, with Oliveira placing eighth, his equal best result in the premier class. Danilo Petrucci (Ducati Team) crossed the line ninth, with Takaaki Nakagami (LCR Honda Idemitsu) closing out the top 10.

Rossi suffered an issue and was out of the race with seven to go, with Iker Lecuona (Red Bull KTM Tech3) exiting with heat exhaustion, Aleix Espargaro (Aprilia Racing Team Gresini) and Joan Mir (Team Suzuki Ecstar) also not finishing.

Sky Racing Team VR46’s Luca Marini clinched an impressive victory in Moto2 after holding off a charging Tetsuta Nagashima (Red Bull KTM Ajo) in the final half of the race, the Italian taking the chequered flag for a fourth-career win and his third in seven races. Nagashima was on the podium once more after his Qatar GP win, joined this time by teammate Jorge Martin (Red Bull KTM Ajo), while Remy Gardner (SAG Racing Team) finished seventh. 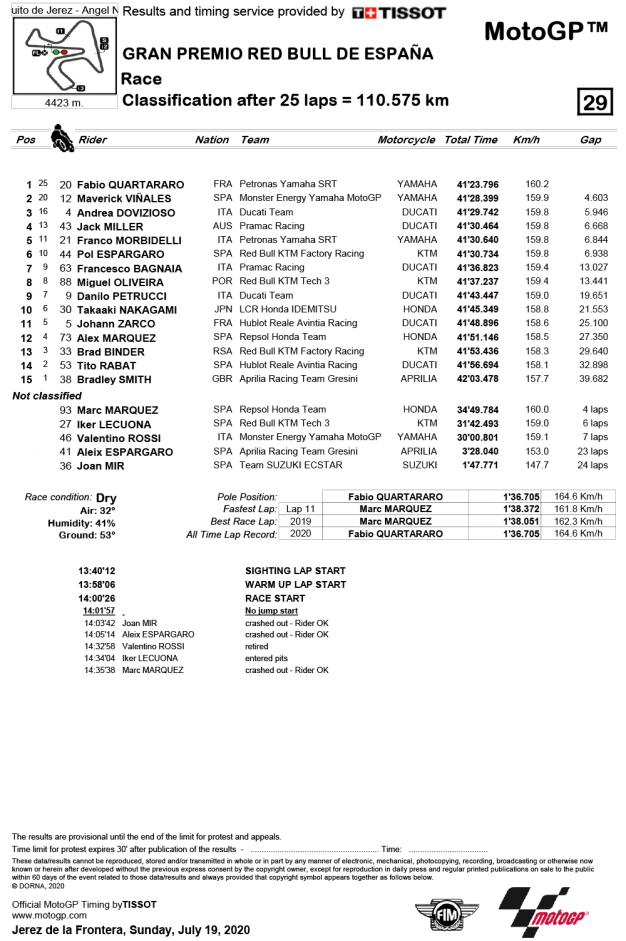 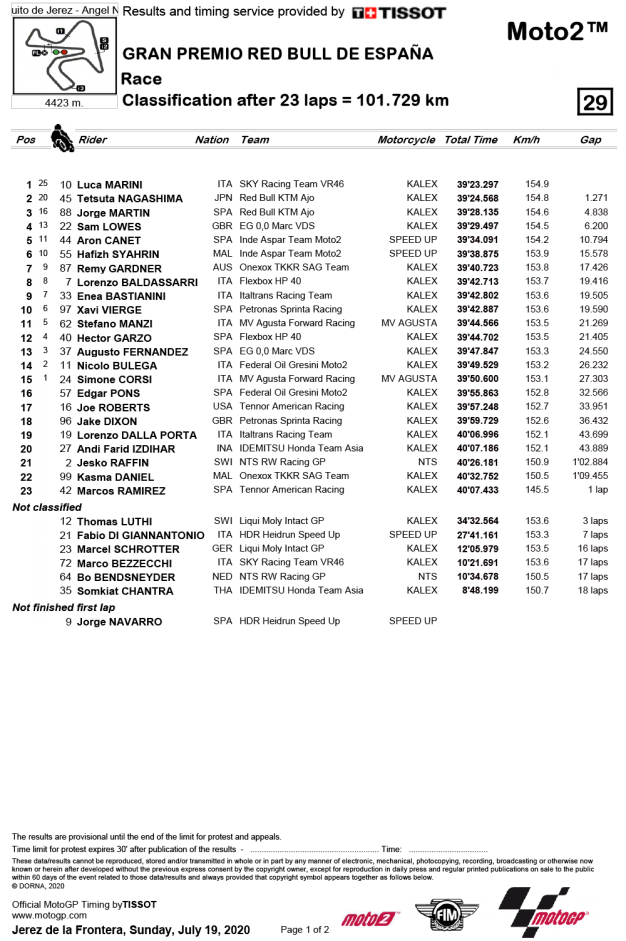 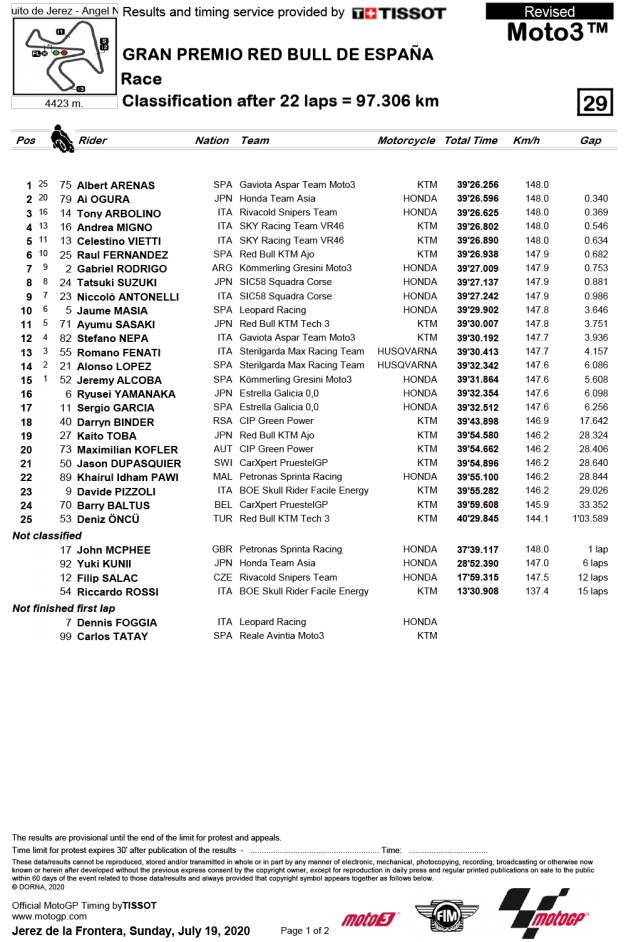 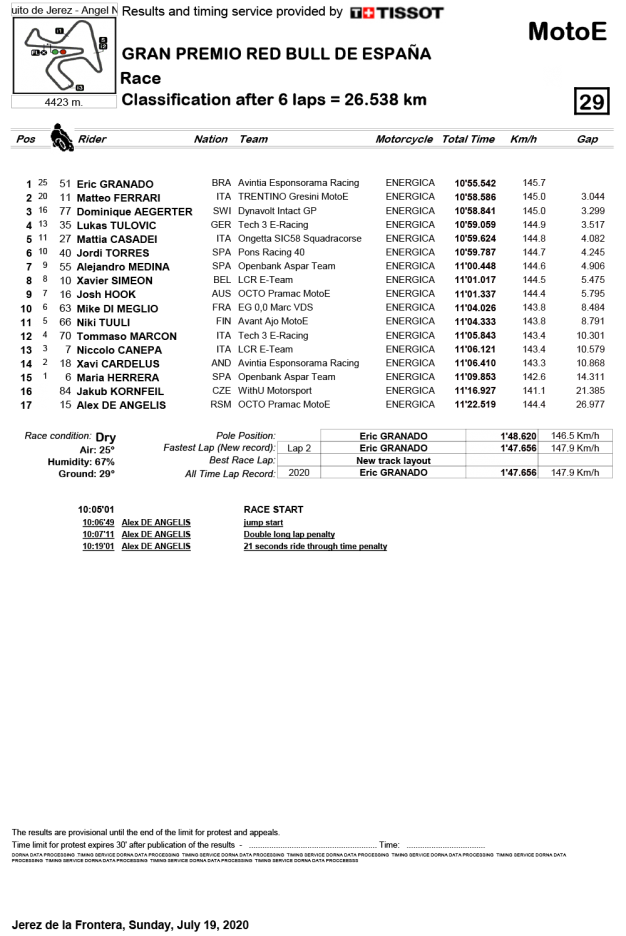