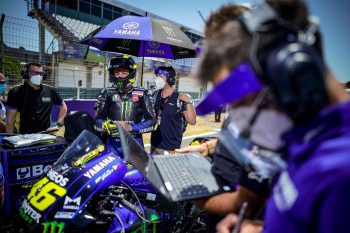 A technical issue ruled Valentino Rossi out of Jerez’s opening race of the MotoGP World Championship on Sunday, ending what was a difficult weekend for Monster Energy Yamaha’s nine-time world champion.

Rossi had a decent start from ninth on the grid, but lost multiple positions after the opening corners and crossed the start-finish line for the first time in 10th position.

After circulating as high as eighth in the mid-stages despite struggling with rear tyre grip, the 41-year-old had settled into 10th when a ‘red alarm’ on the dash of his YZR-M1 prompted Rossi to pull out of the race, denying him of points to open his 2020 campaign.

“It was a tough weekend, because we suffered a lot in the high temperatures with the rear tyre,” Rossi recalled. “It looks like we were not able to make the rear tyre work in the right way. In the race I was not very fast from the beginning, I didn’t have the rhythm of the group that was fighting for the podium. After some laps I had a problem with the rear tyre, because I lost a lot of grip and performance.

“After that, unfortunately, I had a problem with the bike. On the straight I got a red alarm and I had to retire. It is a very strange situation because we will race here two times in a row. From one point of view this is very strange, but from the other side we can take this data and try to make things better and find some solution. It was a bad crash for [Marc] Marquez at a bad point, it was a big high-side – I wish him well.”

Rossi’s non-finish was the low point of a remarkable start to the championship for Yamaha, which won the race with Petronas Yamaha SRT’s Fabio Quartararo and took second place with factory rider Maverick Vinales. Quartararo’s teammate Franco Morbidelli earned fifth.