Fourth at Jerez a satisfying start to Miller’s MotoGP campaign 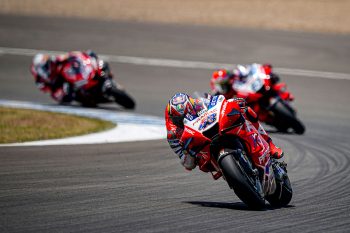 A composed approach from Australia’s Jack Miller earned him a strong haul of championship points as the 2020 MotoGP season finally got underway at Jerez, finishing fourth after challenging for the podium in Spain.

After qualifying fifth, Pramac Racing Ducati rider Miller circulated in second through the middle stages of the race before Maverick Vinales and Andrea Dovizioso moved by in the closing laps for the podium places.

“For the minute, I’m very happy,” Miller said. “To start the championship off like this is great. There’s a lot of key players that haven’t scored points today, so… even a few other boys that were very lucky. I can happy say that I didn’t really have any moments, anything like that.

“Sure, I felt the front push here and there a little bit, but nothing like [Maverick] Vinales or Marc [Marquez] had. I was just following those guys, watching what they were doing, trying to stick to my own pace and brought it home. I probably felt like I had a little bit to sort of take to Dovi [Andrea Dovizioso], but this early on in the championship I felt I better learn from my mistakes of the past and cool my jets a little bit.

“This track itself has not particularly been a favourite for the Ducatis in the past, so to come away with third and fourth here, I think we can be pretty happy. It’s taken its toll, this weekend, on a few of the boys, so I hope they can heal up and be back out racing with us again soon.”

The MotoGP season will continue with practice this Friday, again at Jerez, for what will be the Andalucian grand prix on Sunday afternoon.