Breaking down a drama-packed start to the 2020 championship.

With no crowds and protocols in place to enable the 2020 MotoGP World Championship to commence during the current coronavirus pandemic, the season-opening Grand Prix of Spain on Sunday at Jerez will go down in history as one of the most unique in history. On top of that, the premier class delivered some of the most fascinating storylines on record, making for a certain weekend to remember. 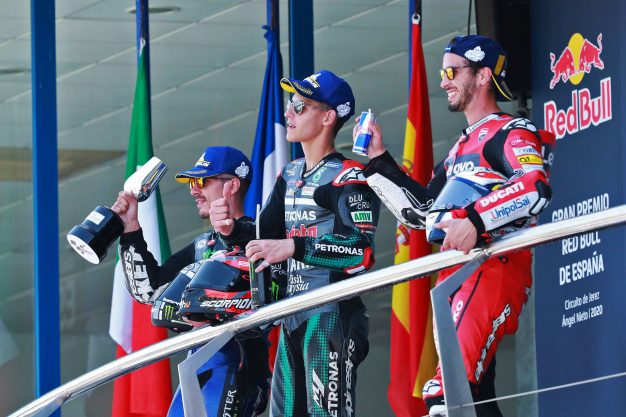 1. Marc Marquez injured:
After leading the race, making a mistake at turn four and then carving his way back through the pack to a podium placing, defending champion Marc Marquez’s day ended at turn three when he was catapulted from his RC213V in spectacular fashion. Unfortunately for Marquez and HRC, he sustained a broken humerus in the incident, has undergone surgery in Barcelona and will be out for some time now.

2. A first for Quartararo:
He finally did it! After coming close on numerous occasions last year as a rookie, Petronas Yamaha SRT’s Fabio Quartararo broke through to win his first-ever MotoGP race from a record-breaking pol position, which was fittingly the number 20 rider’s 20th premier class start of his career. It was actually the maiden time that a satellite Yamaha has won in MotoGP – the last being then Red Bull Yamaha rider Garry McCoy on a 500cc in Valencia 2000 – and the 21-year-old became the first Frenchman to taste victory since Regis Laconi over two decades ago in 1999, also at Valencia with Red Bull Yamaha at the time.

3. Comeback trail:
The way that Marquez sliced his way through the all-star field in truly challenging conditions was phenomenal, even if he didn’t quite pull his comeback to the podium off in the end. When he went off-track while leading on lap four, the Repsol Honda rider dropped to 16th, climbed back inside the top 10 by lap nine and then had worked his way into the top five on lap 19. It was the following lap that he passed Jack Miller for a podium position, but then it all came to a crushing halt come lap 22 of the 25.

4. Podium challenge of Miller:
You have to hand it to Queenslander Jack Miller, featuring prominently in podium contention throughout the journey in sweltering temperates. A pass from Andrea Dovizioso (Ducati Team) on the penultimate lap cost him the podium, but he was satisfied nevertheless and opted to bag points rather than go for broke this early in the season.

5. Rins down and out:
One of the legitimate threats for race wins in 2020, Alex Rins was ruled out of the weekend in Q2 with a broken humerus. After he considered lining up anyway, the Team Suzuki Ecstar rider was declared unfit on Sunday morning after all. 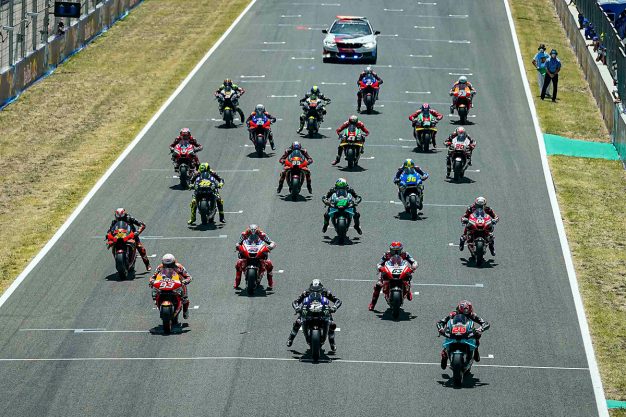 6. Injury to podium:
It was only a few weeks ago that we reported on Andrea Dovizioso breaking his collarbone and undergoing surgery following a crash while riding motocross in the final stages of the layoff. So, when he landed on the podium in third on Sunday, it was a sigh of relief for both himself and those in his corner – especially with Marquez being injured at round one. Is this the year he finally delivers Ducati another championship?

7. Costly crash for Crutchlow:
Just days after it was announced that Alex Marquez would be taking his place at LCR Honda due to the signing of Pol Espargaro in the works team, Cal Crutchlow’s year got off to a rocky start when he crashed in Sunday morning warm-up and fractured his scaphoid. Good news is, he’s had a successful op and intends to be back on track this Friday. Yes, Friday!

8. Rookies debut:
It was without fanfare, but top-finishing rookie on Sunday was none other than Alex Marquez aboard the factory RC213V in 12th. The current Moto2 champion has copped plenty of heat about being alongside brother Marc at Repsol Honda, but it was a consistent ride, he would’ve learned a lot and we’ll see where he ends up come the end of the year since he always seems to figure things out sooner or later.

9. KTM gains strength:
At the conclusion of Friday practice it was inspiring for KTM to have no less than three RC16s inside the top 10, being Iker Lecuona (Red Bull KTM Tech3) in eighth, directly ahead of Red Bull KTM Factory Racing teammates Pol Espargaro and Brad Binder. Espargaro qualified in P7, then starred in the race on his way to sixth, while Miguel Oliveira scored eighth with Tech3. Binder was hugely impressive despite a mistake early on, setting a scorching pace to recover to 13th on debut.

10. Code red halts Rossi:
On the verge of signing an extension with Yamaha to ride in the Sepang Racing Team for a further year or two, round one never really fired properly for Valentino Rossi. He struggled to find comfort in the race, before his factory bike signalled a red alarm on the dash and he was forced to stop while running 10th with just over five laps remaining. He’ll be eager to improve things this weekend.