Both Rins and Crutchlow cleared to ride again at Jerez 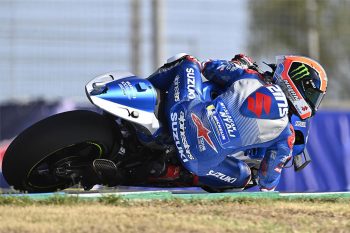 Injured MotoGP front-runners Alex Rins and Cal Crutchlow have been declared fit to start this weekend’s Andalucia GP at Jerez, joining world champion Marc Marquez in the list of riders who will return during practice.

Team Suzuki Ecstar’s Rins went down in Q2 to end his weekend at the Spanish GP early, dislocating his shoulder and sustaining a fractured humerus in the incident, but has passed medical checks conducted on Thursday.

“I’m so happy to be here,” Rins beamed. “Saturday was a really bad crash – it’s a crash you don’t want to have. I lost the front at turn 11 very early. To avoid Jack [Miller], I tried to save the front tyre and I entered so fast into the gravel, and as Cal said the gravel here is so deep.

“I lost the rear, I jumped from the bike and I touched the gravel with the shoulder and it immediately came out. I broke a small piece too. Anyway I tried to recover all I can with the physiotherapist at the track. We passed the exam, but let’s see tomorrow on the bike, I’m not at 100 percent and will feel pain, but this is racing. For sure, if I feel a lot of pain and I’m not secure to ride, I will stop.”

Crutchlow underwent surgery in Barcelona on Tuesday to have his scaphoid fracture screwed, now set to be back on the grid with LCR Honda Castrol after crashing out of the morning warm-up last Sunday morning.

“I flew back to Barcelona and Dr [Xavier] Mir performed the operation on Tuesday to put a screw in to the scaphoid, which I believes makes it the strongest now because I can ride with it,” Crutchlow commented. “It seems not too bad now. Let’s see how it is and if I can ride with it tomorrow.

“It won’t be easy to ride injured, but the professionals that we are, riding injured – with Alex and Marc – we all know the decision taken either by ourselves with the medical team if we’ll be able to cope riding the bike – you don’t know until you get on the bike. We’ve all passed the fitness test but riding these bikes is a different story. I’ll see how it goes and I look forward to getting on the bike in the morning.”