Race of attrition at Jerez sees Miller crash out during the early stages. 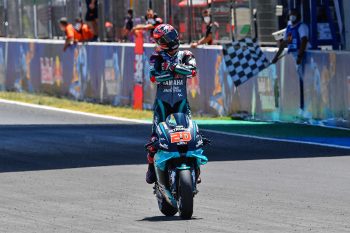 Yamaha teams took a clean-sweep of the Red Bull Grand Prix of Andalucia podium, led by Petronas Yamaha SRT’s Fabio Quartararo as he extended his advantage in the MotoGP standings.

While Quartararo dominated a race of attrition to top Monster Energy Yamaha teammates Maverick Vinales and Valentino Rossi for the first all-Yamaha podium since Phillip Island 2014.

Quartararo got the best launch and from pole, with Rossi also getting away well from P4, but drama unfolded behind as fifth-place Miguel Oliveira (Red Bull KTM Tech3) crashed in a turn one melee.

That incident also then involved Brad Binder (Red Bull KTM Factory Racing) and Bradley Smith (Aprilia Racing Team Gresini). The Portuguese rider was down and out of the race, with Binder running off circuit and dropping to the back and Smith’s race compromised too.

There was a three-way Yamaha scrap at the front though and it was Quartararo leading Vinales and Rossi, who had a slight gap to the two Pramac Racing riders of the quick starting Jack Miller and Francesco Bagnaia just behind.

Quartararo was getting down to business quickly though with the hammer well and truly down, before Vinales went wide at the final corner trying to pounce. Instead, that let The Doctor through into second, with Quartararo starting to escape and Vinales having lost out some significant ground.

Just behind, Bagnaia went for P4 underneath Miller as well, but was also wide, before making a miraculous save to keep his GP20 upright. Quartararo’s lead on lap four was up to 1.5s and Vinales couldn’t find a way back through on Rossi to try and give chase.

The Pramac Racing duo were also breathing down the YZR-M1 rider’s neck as the number 20 Petronas Yamaha SRT started to clear off into the distance and Rossi couldn’t do anything about Quartararo’s pace either. By lap six the Frenchman’s lead was nearly three seconds.

With 10 laps down that lead was looking unassailable, with Bagnaia making progress to get through on Miller and Viñales, as the Italian locked his radar onto the boss’s rear wheel. The race in Jerez was quickly starting to become a race of attrition in the blistering Andalusian heat.

Then Miller slid out of contention at turn nine having made his way through on Vinales at the beginning of the lap, and teammate Bagnaia passed Rossi for second place.

Franco Morbidelli (Petronas Yamaha SRT) had made steady progress and was the fastest man on track as he got in the hunt for that illustrious first MotoGP podium, but drama was just around the corner in a cruel end to the Italian’s race as he encountered engine troubles with nine laps to go.

Heartbreak for Morbidelli, and there would be more incoming for his compatriot Bagnaia. Safely in P2 ahead of Rossi, smoke started to stream out of his GP20 and onto the back straight, just six laps away from spraying the Prosecco, Bagnaia was out of contention.

This saw Rossi back up into second, with Vinales back in the podium places just behind. El Diablo’s lead was up to nearly nine seconds and the win – barring any mistakes or reliability issues – was surely his. Vinales was all over the back of the number 46, but Rossi was a demon on the brakes.

Then though, after not having put a wheel wrong the whole race, Rossi was slightly wide at turn nine and Top Gun struck. Vinales was up to second and was able to immediately get some bike lengths on the veteran Italian, although The Doctor couldn’t relax with Takaaki Nakagami (LCR Honda Idemitsu) just eight-tenths down the road.

At the front though it was all about one man. Quartararo made no mistakes in the brutal conditions to take his second consecutive victory, cementing his lead in the championship over second-place Vinales. The Spaniard salvaged 20 points, which could be crucial in the long run, but he had no answer for his 2021 teammate in Jerez.

Rossi’s return to the rostrum was more than welcomed for the 41-year-old, putting in a mesmerising ride to notch up his 199th MotoGP podium and his 235th across all classes.

Nakagami’s fourth was the Japanese rider’s best ride in the premier class as he finished just 6.113s off the win and half a second from the podium, putting the Japanese rider fourth in the championship heading to Brno. Joan Mir (Team Suzuki Ecstar) banished the demons from the Spanish GP to finish fifth.

Andrea Dovizioso (Ducati Team), meanwhile, recovered from a P14 starting slot to take sixth in Jerez after a third place finish last weekend, with Pol Espargaro (Red Bull KTM Factory Racing) in seventh the only KTM to finish in a tough day for the Austrian factory with Oliveira, Binder and Iker Lecuona (Red Bull KTM Tech3) all crashing out.

The lone Repsol Honda managed to beat Johann Zarco (Hublot Reale Avintia) as the Frenchman took ninth, with the remarkable Alex Rins (Team Suzuki Ecstar) defying the odds to complete the race and take 10th – a super-human effort from the Spaniard after suffering a dislocation-fracture to his shoulder eight days ago.

Tito Rabat (Hublot Reale Avintia), Smith and the second injured rider on the grid, Cal Crutchlow (LCR Honda Castrol), were the final finishers – a strong effort from the latter to complete the laps and earn points as a result.

Binder once again showed his cracking pace after dropping back in the turn one clash, but the South African rookie then sadly crashed out unhurt at turn 13. Danilo Petrucci (Ducati Team) and Aleix Espargaro (Aprilia Racing Team Gresini) also crashed out.

Italtrans Racing Team’s Enea Bastianini is back on top of a grand prix podium for the first time in two years after the Italian clinched a debut Moto2 victory. He had some familiar company on the podium in the form of Sky Racing Team VR46’s Luca Marini, with his teammate Marco Bezzecchi taking his first Moto2 rostrum finish in third.

That made it an all-Italian top three in the intermediate class, for the first time since Imola 1998. Meanwhile, Australia’s Remy Gardner (SAG Racing Team) scored points for 14th position.

Jordi Torres (Pons Racing 40) made it a newcomer 1-2 as he came home second and avoided the clash, with Mattia Casadei (Ongetta SIC58 Squadra Corse) completing the podium and back on the box for the first time since Misano last year. Josh Hook (Octo Pramac MotoE) crossed the line in P8. 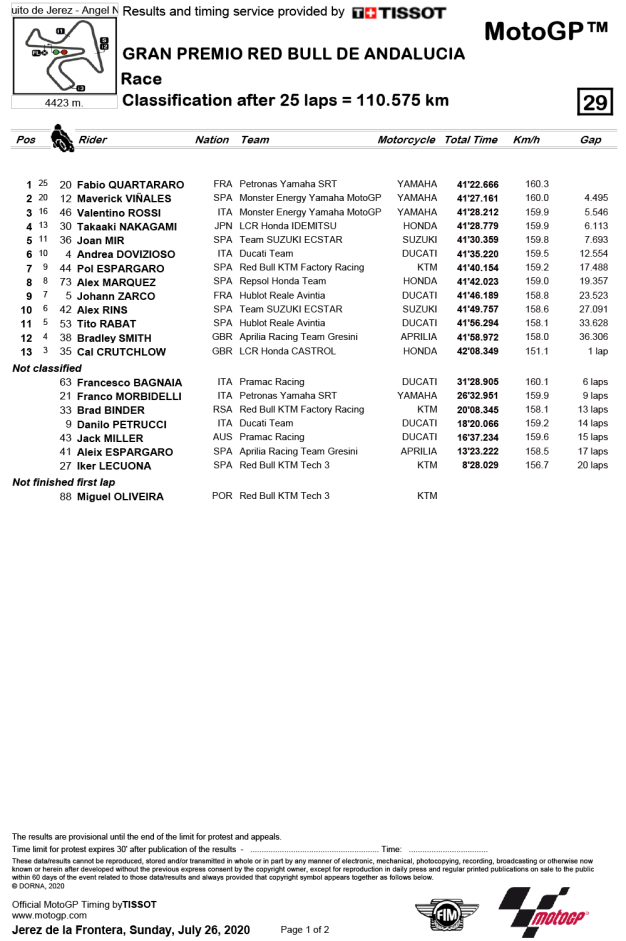 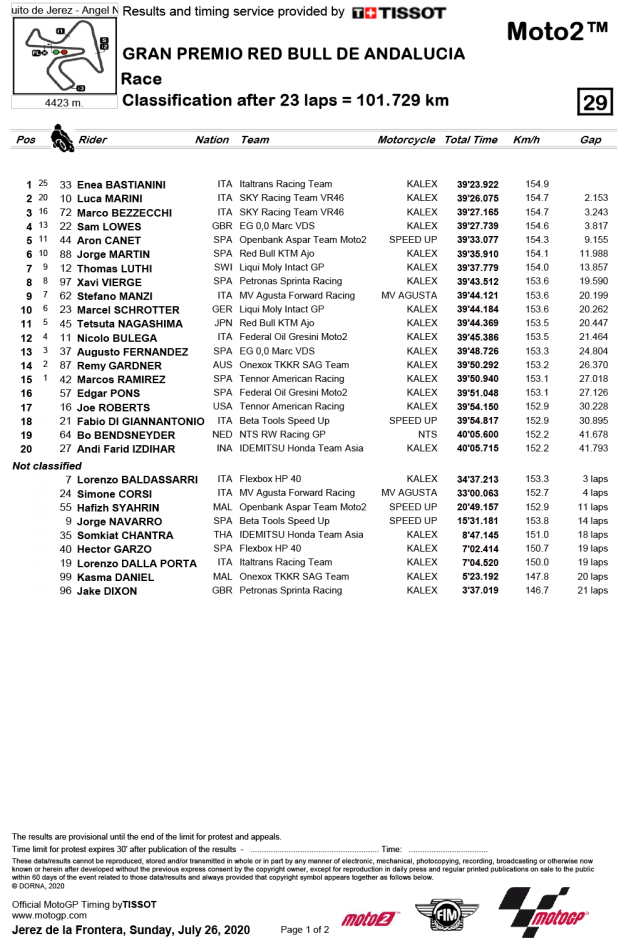 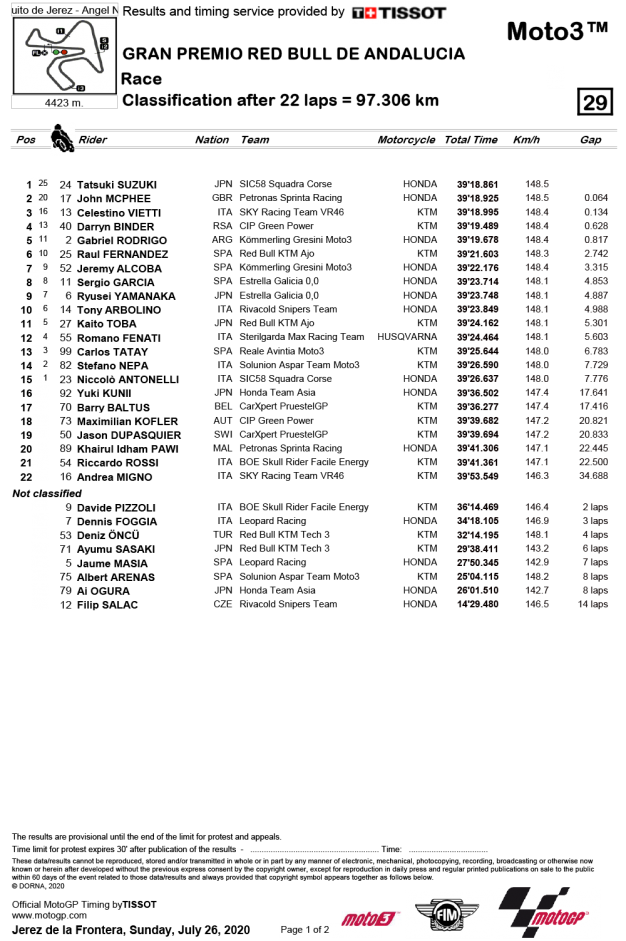 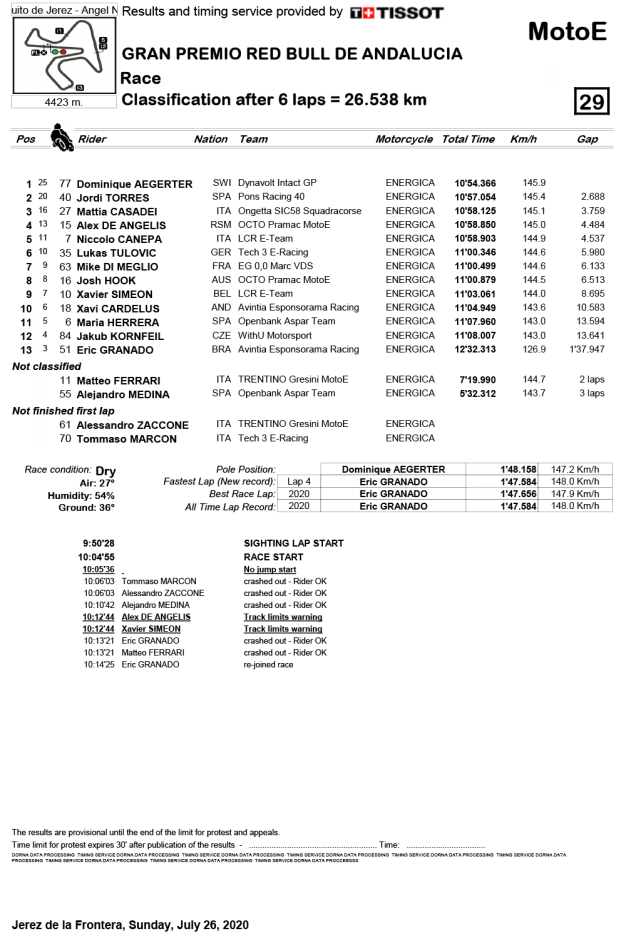