Additional round in Europe to be confirmed as season finale. 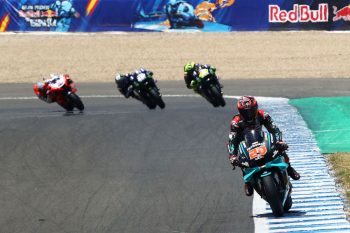 This year’s MotoGP World Championship will remain in Europe for the entire season after confirmation arrived that the flyaway rounds in Argentina, Thailand and Malaysia have now been cancelled.

Previously postponed, the ongoing coronavirus outbreak and resulting complications have resulted in the cancellation of the events to be confirmed.

However, it has instead been revealed that an additional grand prix is to be added to the 2020 calendar in Europe, becoming the season finale. The venue – rumoured to be Portimao – will be announced on 10 August.

“It is with great sadness that we announce the cancellation of the Argentina, Thailand and Malaysian grands prix this season and they will be very much missed on the 2020 calendar,” stated Dorna Sports CEO Carmelo Ezpeleta.

“The passion of the fans who often travel across continents to enjoy MotoGP with us in Termas de Rio Hondo, Buriram and Sepang is incredible, creating as they do such an incredible atmosphere and welcome for the sport.

“However, we are delighted to add another Grand Prix in Europe to the 2020 calendar and reveal our new agreement that will see MotoGP racing in Thailand and Buriram until at least 2026.”

It was previously announced in May that Phillip Island’s Australian Motorcycle Grand Prix wouldn’t be going ahead this year, nor would the Japanese GP at Motegi or Grand Prix of the Americas flyaways.

The MotoGP championship commenced this month with consecutive race weekends at Jerez, now set to travel to Brno in the Czech Republic for round three between 7-9 August.

It was also recently announced that the British, Dutch and Qatar rounds of the Superbike World Championship (WorldSBK) have been cancelled, also due to complications from the COVID-19 pandemic.