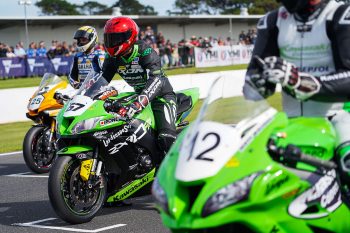 The 2020 Mi-Bike Australian Superbike Championship (ASBK) calendar has been reduced to four rounds in total after multiple events have been dropped from an overhauled remaining schedule.

With government restrictions and border closures escalating due to the second wave of coronavirus, Morgan Park and a standalone Phillip Island are now absent.

Instead, Wakefield Park in New South Wales will feature as round two between 16-18 October, followed by a delayed Winton event in Victoria on 6-8 November and the previously-postponed South Australian round at The Bend on 20-22 November.

“The ASBK Management Team has worked tirelessly in the last 72 hours to review the calendar as new state government restrictions have been announced, communicating closely with circuits to ensure that a revised 2020 [championship] can proceed for the ASBK teams, sponsors and fans when restrictions are lifted,” ” as statement confirmed.

“We are pleased to have hosted an exciting first round of 2020 at Phillip Island Grand Prix Circuit and we look forward to returning in 2021. Further thanks to the Motorcycle Sportsmen of Qld for their understanding and support in these unprecedented times.”

According to Motorcycling Australia (MA), ‘the ability to welcome spectators at future ASBK rounds will be reviewed closer to each round and assessed on a state-by-state basis’.

This year’s ASBK calendar was initially scheduled to span seven rounds prior to the disruption of COVID-19, with the ASBK Management Team continually adjusting the series in an effort to crown champions during the 2020 season.