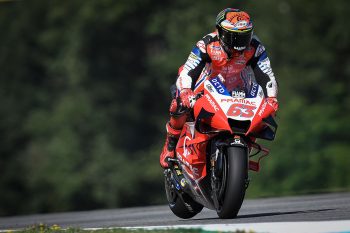 Italian Francesco Bagnaia has been ruled out of the Brno round of MotoGP after fracturing his right tibia in Friday practice.

The Pramac Racing Ducati rider went down towards the end of FP1 in which he was 15th fastest, injuring his leg in the fall and potentially requiring surgery.

“Tomorrow morning I will be back in Italy,” Bagnaia said. “Luckily the fracture did not affect the ligaments of the knee, so the recovery time will be faster.

“I’m really sorry because this morning the feeling with the bike was really good. My goal is to be on track for the second race in Austria. I would like to thank all the medical staff, the Clinica Mobile, Pramac team, Ducati and the VR46 Riders Academy for their great support.”

Bagnaia – who has recently been linked to the second factory Ducati Team seat alongside Jack Miller in 2021 if Andrea Dovizioso cannot reach an agreement – will be replaced by official test rider Michele Pirro in Austria.