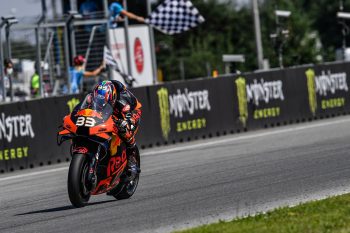 Brad Binder and Red Bull KTM Factory Racing have stood atop the podium in MotoGP for the first time after the rookie delivered a shock win at Brno, three races into his premier class career.

In a race for the ages that saw the South African come good on his promise as a former Red Bull MotoGP Rookie, Moto3 champion and Moto2 race winner with the Austrian factory.

Behind Binder there were two more firsts after the fascinating race day shake-up in the Czech Republic, with Franco Morbidelli (Petronas Yamaha SRT) taking his first MotoGP rostrum and Johann Zarco back on the box in third to give Esponsorama Racing their first MotoGP podium despite a long lap penalty.

Morbidelli was the man fastest out the blocks as the lights went out, picking teammate Fabio Quartararo’s pocket round turn one and bolting into the distance almost immediately as Zarco lost out from pole.

Aleix Espargaro (Aprilia Racing Team Gresini) also managed to get past the number five as he launched from fourth into the top three, before he even struck for second and dispatched Quartararo. The Red Bull KTM duo of Pol Espargaro and Binder made great starts to slot into fourth and fifth too, leaving Zarco initially down in P6.

Binder was then a man on a mission, passing teammate Espargaro and then Aleix Espargaro, soon stuck to the rear wheel of Quartararo as Zarco followed suit to strike back against former teammate Pol Espargaro, but that would soon to serve up some drama.

Before that though, the number 44 made it through on lap six and immediately set sights on his teammate and Quartararo as the battle for second became a double factory KTM vs Quartararo fight. On lap nine, Binder was through on ‘El Diablo’, striking at turn three and Pol Espargaro was next through.

Drama was about to unfold at turn one the next time around as the KTM of Espargaro was a little wide and Zarco was committed on the inside, leaving both heading for the same piece of tarmac. As the KTM swept back to get the run up through turn two, the pair made contact and Espargaro went down, earning Zarco a penalty for the incident.

Despite the heartbreak for one orange bike, there was plenty still to celebrate a little ahead on track. Honing in on Morbidelli and the race lead, Binder wasn’t showing any signs of slowing up, reeling in the Yamaha at speed and soon within striking distance.

With nine laps left in Brno, the rookie sensation struck and Binder was in the lead of a MotoGP race for the first time, with the KTM immediately starting to bolt into clear air at the front.

On the same lap, Zarco took his long lap penalty and, despite pre-conceptions, that was a show in itself and one of the most spectacular moments of the race. Inch perfect on the right side of the line, he saw his gap back to Quartararo in fourth evaporate, but screamed out just ahead of his compatriot.

Meanwhile, Binder raced on, Morbidelli held firm and the battle at the front became one of nerves. The fight just behind the top two was starting to heat up though and, with Zarco staying ahead of Quartararo, it seemed like solid damage limitation for the championship leader if he held fourth.

The double Jerez winner was struggling, however. Alex Rins (Team Suzuki Ecstar), Valentino Rossi (Monster Energy Yamaha MotoGP) and Miguel Oliveira (Red Bull KTM Tech3) were all starting to hunt him down, with the Suzuki striking first with five laps to go.

Nine-time world champion Rossi soon followed suit on the same lap and Quartararo quickly found himself lingering down in sixth. With four laps to go, the number 20 also fell victim to Oliveira’s charge and the focus shifted back to Zarco, who now had Rins for very close company.

Binder – barring a mistake – was a few kilometres from making some very big dreams a very big reality and Morbidelli looked secure to hit his own milestone too, but Rins was hot on the heels of the Ducati in third and the gap was just 0.6s between the GP19 and GSX-RR with a couple of laps to go – soon down to nothing as Zarco began the final lap.

First to complete that would be Binder in making it look easy, over four seconds clear after more than four years of tireless work from the Austrian factory to see the RC16 come home first and Binder etch his name into premier class and KTM folklore.

Childhood dreams realised across the board, Morbidelli continued the trend as he brought his Yamaha home second to secure a fantastic maiden MotoGP podium and he moves into P3 in the overall standings. In the duel for third, Rins was looking menacing on the final lap, but Zarco kept the Suzuki rider at bay.

Fourth place for Rins remains remarkable, however, with the number 42 taking some valuable points after suffering a dislocation-fracture to the shoulder at the Spanish GP. Close behind was Rossi, who climbed to P5 from a 10th starting place in another great ride for ‘The Doctor’.

Oliveira finished sixth to cement his best premier class finish, but Quartararo won’t be too pleased to have finished 11 seconds from the win in seventh. Nevertheless, those are valuable points in the title race as key rivals remained behind him on race day.

Takaaki Nakagami (LCR Honda Idemitsu) finished one second adrift of Quartararo in eighth and two seconds up the road from Jack Miller (Pramac Racing Ducati) after the Australian recovered from a tough start to pip Aleix Espargaro on the last lap.

In other key stories, Iker Lecuona (Red Bull KTM Tech3) lost the front and collected Joan Mir (Team Suzuki Ecstar) in the early stages as the duo crashed out of contention. 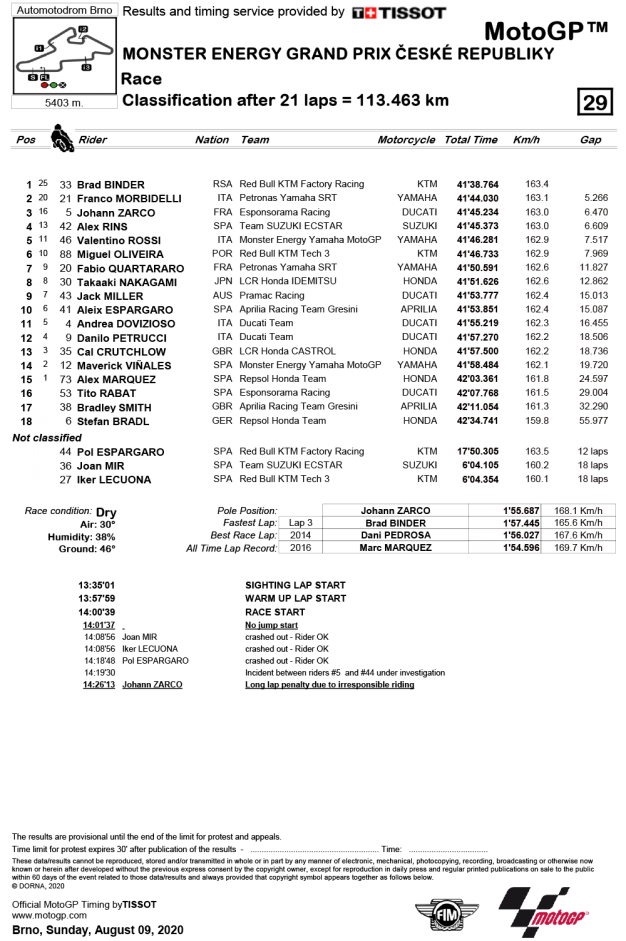