Brookes to ‘move on’ following Irwin incident in BSB restart

Mixed start to 2020 campaign for title favourite at Donington Park. 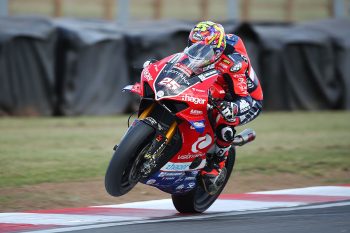 Experienced Australian Josh Brookes has vowed to ‘move on’ after contact with Andrew Irwin saw him crash out of race three at Donington Park in the opening round of the 2020 British Superbike Championship (BSB).

VisionTrack Ducati’s Brookes went 3-6 in the opening pair of races for the weekend, before the high-speed incident in the final encounter ended his weekend prematurely. Race stewards later disqualified Irwin for the clash.

“What can I say?” Brookes recalled. “Despite a podium, I wasn’t happy with the bike in race one, so we made some changes overnight. They really didn’t make a lot of difference in today’s opening race and I ended up making a couple of silly mistakes, so I’ll take the blame for that one.

“We had to change the bike again for the third race and that worked as we were competitive and had I got a better start – I think I could have gone with Tommy [Bridewell]. And then I encountered the situation with Irwin. Glenn got past me fine, but Andrew touched me as he went past and down I went. These things happen, so we move on and hope for better results at Snetterton.”

Honda-mounted Irwin rode to both opening race wins of the year, before Ducati rider Tommy Bridewell won race three, however it’s Glenn Irwin who leads the standings following round one. Brookes currently sits seventh in points.