Decision made by Italian prior to Saturday qualifying at Red Bull Ring. 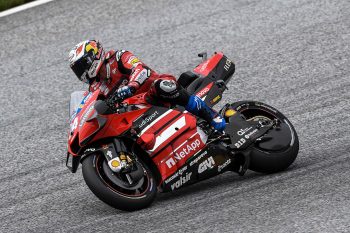 Italian Andrea Dovizioso is set to depart the factory Ducati Team at the conclusion of the 2020 MotoGP World Championship, it has been revealed on Saturday at Red Bull Ring.

The pair have been unable to agree to terms on a contract from 2021 and Ducati Team manager Davide Tardozzi indicated yesterday that a decision would be made following the Austrian double-header.

However, Dovizioso’s manager Simone Batistella suggested this afternoon on Sky Italy that it has in fact been decided that the 34-year-old will not remain at Ducati next season.

With options limited, a sabbatical could be on the cards for Dovizioso, save for a potential factory deal with Aprilia as it awaits the fate of Andrea Iannone. It’s understood that he intends to continue in the premier class.

“We have communicated to Ducati that Andrea has no intention of continuing for the next few years, that he now wants to concentrate on the next races, but that there are no conditions to continue together,” announced Batistella.

The news was then confirmed by Ducati sporting director Paulo Ciabatti: “We met Simone this morning here at Red Bull Ring and realised that unfortunately there are not the conditions to continue our relationship with Dovi beyond the end of the current contract.

“Ducati and Andrea will now fully concentrate on the remainder of the 2020 season, starting from tomorrow’s Austrian GP, with the common goal to add more wins to the 13 first places already achieved together and fight for the title until the end of the championship.”

With Australian Jack Miller already signed to the factory team for next year, he could be joined by current Pramac Racing teammate Francesco Bagnaia, unless triple MotoGP champion Jorge Lorenzo – a race winner with Ducati in 2018 – opts to come out of retirement and a deal can be struck.

There is also the possibility that Johann Zarco, fresh from claiming pole position and a podium with Esponsorama Racing aboard a GP19 at Brno last weekend, could be elevated directly into the official team in place of Dovizioso. Danilo Petrucci has already signed with KTM for 2021.

Dovizioso joined Ducati in 2013 and has finished runner-up in the standings behind Marc Marquez for the past three seasons, including 2017, 2018 and 2019. He also previously took third in the championship during 2011 with Honda.