Podium for Miller in race that will be remembered for horror crash.

Ducati Team rider Andrea Dovizoso has responded to his factory split in the most emphatic way, scoring the Italian manufacturer’s 50th premier class victory at the chaotic 2020 Grand Prix of Austria.

The Spielberg race weekend will be remembered more for two horrifying crashes that incredibly didn’t result in major injury.

It had been a tumultuous weekend for Dovizioso, his eight-year relationship with Ducati had crumbled and both he and Jack Miller (Pramac Racing) were under pressure to continue the unbeaten winning streak for the Italian manufacturer at the Red Bull Ring in Spielberg, a record held since 2016.

Back to back rounds are scheduled for the Spielberg circuit due to the coronavirus pandemic and the first meeting will be remembered as much for two frighteningly lucky escapes – the first occurring in the Moto2 race when Hafizh Syahrin (Inde Aspar Team) struck the stationary machine of Enea Bastianini (Italtrans Racing Team).

The second incident, in the MotoGP race, saw the motorcycles of Johann Zarco (Esponsorama Racing) and Franco Morbidelli (Petronas Yamaha SRT) fly through the air and narrowly miss contact with the factory Yamaha’s of Valentino Rossi and Maverick Vinales (Monster Energy Yamaha MotoGP).

On a positive note, Joan Mir (Team Suzuki Ecstar) broke through for his maiden podium in the premier class, capitalising on a mistake from Miller to claim second spot in the closing moments. Championship leader Fabio Quartararo (Petronas Yamaha SRT) and Vinales both encountered problems that saw them finish outside the top seven.

In the opening laps it was Miller who took the holeshot and led the field, maintaining a moderate pace in an effort to conserve tyres for the final stages. Behind him the rest of the pack were jostling for position, with Dovizioso holding down second from a rampant Pol Espargaro (Red Bull KTM Factory Racing).

Further back, it was his teammate Brad Binder that was setting the hot lap times, eager to press through the field after the lowly qualifying result of 17th. Quartararo had inexplicably run on at turn three and dropped back through the pack.

By lap seven the field at the front had bunched, with Mir and Miguel Oliveira (Red Bull KTM Tech 3) now getting in on the action. The following lap, disaster struck.

As Zarco and Morbidelli attempted to negotiate the 200km/h run up to turn three, contact was made and both riders went down. In a tangle of epic proportions, Zarco slid through the grass before coming to a stop while Morbidelli hurtled through the gravel trap.

As the crash unfolded, it was apparent both the Ducati and Yamaha machines had horrifyingly continued on a trajectory that would intersect turn three – with both Rossi and Vinales already prone at the apex.

The Yamaha of Morbidelli slid across the track at speed, somehow splitting the gap between Rossi and Vinales and averting a catastrophe. The Ducati of Zarco continued to cartwheel, also somehow avoiding Vinales. A brief pause and a confused glance were all that was offered from the Yamaha pilots before setting off again, only to be greeted by red flags.

Replays showed that centimetres either way would have been tragic while incredibly, Morbidelli and Zarco were relatively unscathed. Undeterred, the warriors prepared for a restart, this time for a reduced distance of 20 laps with Pol Espargaro promoted to pole position.

Miller once again took a flyer from the start, pushing hard as it was revealed he had soft compound tyres fitted on both the front and back of his Ducati GP20. Espargaro, Dovizioso and the Suzuki’s of Mir and Rins gave chase with Oliveira closing in.

As Rins pushed past Espargaro to close the now one second gap to Miller, the two championship leaders in Quartararo and Vinales had fallen back out of contention. With Miller showing signs of tyre wear, Dovizioso also applied the pressure while the KTMs of Espargaro and Oliveira battled it out.

On lap nine, in what looked like a similar incident to the previous week in Brno, Espargaro blew his potential for the podium and went down in a tangle with another rider – this time it was Oliveira – leaving Binder to salvage a result for the home team.

Several laps later, Dovizioso and Rins had dispatched Miller but Rins was showing signs of tyre degradation. However, he pushed harder, showing a wheel to Dovi before losing the front completely. It was still a remarkable performance from Rins, considering his shoulder fracture–dislocation suffered at Jerez only a few weeks earlier.

With nine laps remaining, his team mate Mir was making progress on the second Suzuki. It became a three-way battle for top honours, with Dovizioso showing a clear advantage. Further behind, Binder was in fourth with Rossi and Takaaki Nakagami (LCR Honda Indemitsu) in pursuit.

With four laps to run, Dovizioso had pulled almost a second clear with Miller holding firm in second. Mir was looking for an opportunity to pass the Ducati, but Miller was somehow finding enough drive out of the turns to hold him off. Mir would have been aware that one mistake would cost him his maiden premier class podium.

As Dovizioso streaked towards the finish Miller defended splendidly, pulling a gap through the vulnerable turn six and looked set for a well-deserved second. The final twist to an unforgettable weekend of racing saw Miller run wide at the penultimate turn nine, allowing Mir through for his first ever podium to relegate Miller to third.

After a nightmare qualifying back in 17th, Binder backed up his Brno victory to salvage a creditable fourth followed by Rossi as top Yamaha and Nakagami as top Honda. Danillo Petrucci (Ducati Team) avoided the drama to finish seventh ahead of Quartarao and Iker Lecuona (Red Bull KTM Tech 3).

Clawing his way back to the top 10 was Vinales, who, after falling back through the field from the restart, was ironically able to set several fastest laps towards the end of the race.

The Red Bull Ring is slated to repeat the action again next week, as Fabio Quartarao (67 points) maintains a slender championship lead to Dovizoso (56 points), while Vinales slips to third (48 points). It has also been confirmed that Marc Marquez will not be riding next weekend.

All Australian eyes were on the Moto2 race with Remy Gardner (Onexox TKKR Sag Team) on pole, but it was Jorge Martin (Red Bull KTM Ajo) who took the holeshot with Marcel Schrötter (Liqui Moly Intact GP) relegating the Aussie to third in the opening stages.

What followed on lap five was the first of two very nasty incidents. Championship leader Enea Bastianini (Italtrans Racing Team) high-sided on the exit of turn one, leaving his bike prone with the field at speed at behind him. Riders dodged the stricken bike until Hafizh Syahrin (Inde Aspar Team) came upon it unsighted.

Syahrin collected the stationary machine at speed, disintegrating his own machine in the process but escaped serious injury. Martin went on to record the victory after the restart, followed by Luca Marini (Sky Racing Team VR46) with Schrotter filling the podium. 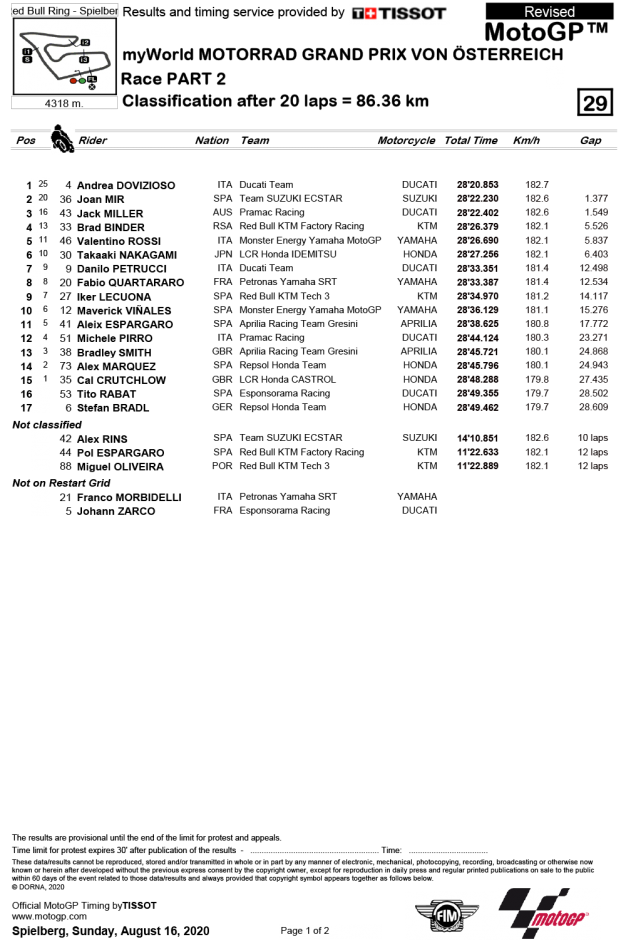 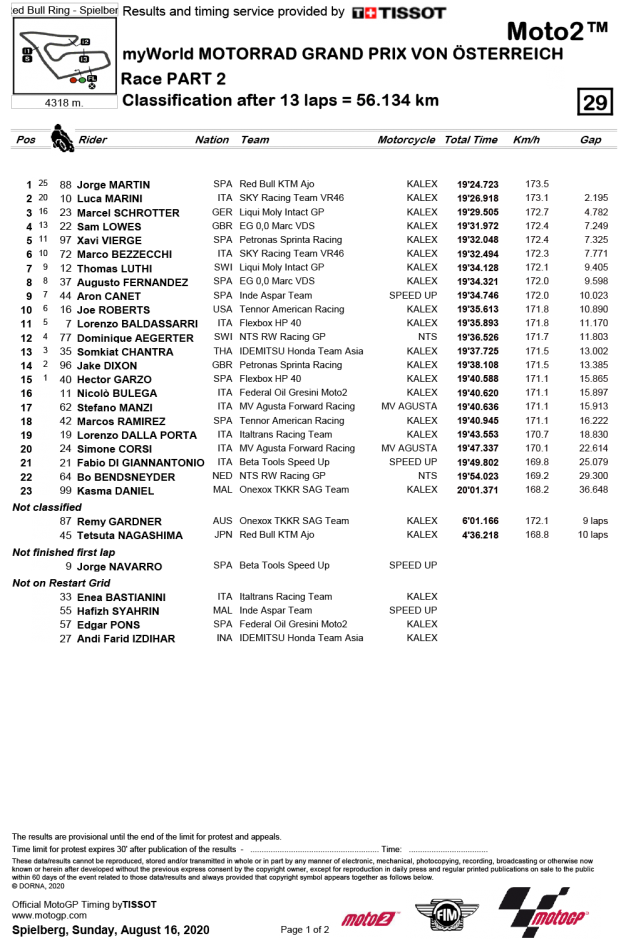 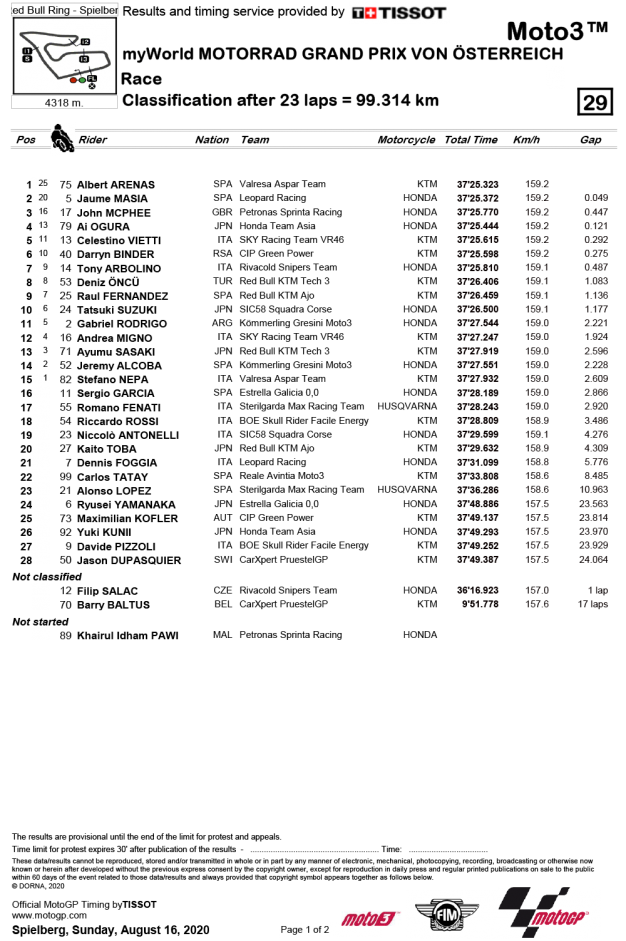