Soft front tyre selection the only option for Miller on restart

Convincing first podium of the year for Queenslander in Austrian thriller. 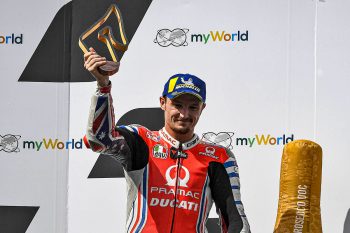 The decision of Jack Miller to select a soft front tyre for Sunday’s restart at Red Bull Ring was the only genuine option after already using his selection of the preferred medium compound.

Miller rode to his first podium of the 2020 MotoGP season at Red Bull Ring in third position after leading the early stages, following Andrea Dovizioso and Joan Mir across the line.

It was an exceptional effort from the Pramac Racing rider, who had previously failed to score points in the Grand Prix of Austria during his premier class career, and a strong way to bounce back from ninth in Brno a week earlier.

“20 laps is still a long time around here and I didn’t have any other option but to put the soft on,” Pramac Racing’s Miller said. “It was either hard, which I hadn’t used at all, or soft, which I’d done a few laps on, so we put on the soft.

“In the second race I tried to make a bolt, it didn’t really work… might have to work on that skill [laughs] for the future. I got the front hot, it started bouncing a little bit and I just tried to recover, manage it as best I could.

“I made a small error in trying to defend on Joan, tipping it in early and trying to close the door a little bit, thinking he was on me. As soon as I did, it started bouncing and I was not pulling any more lever. It’s a shame, but we’re back here in seven days and I hope we can improve on that.”

Miller now sits seventh in the championship standings following his breakout podium in Spielberg, expected to be a challenger for victory when the series continues again in Austria this weekend.