Factory teammates Rossi and Vinales on frightening events of Sunday. 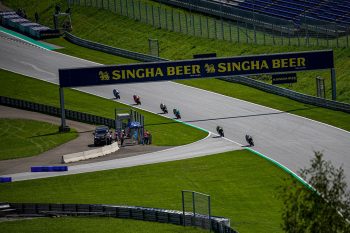 Monster Energy Yamaha teammates Valentino Rossi and Maverick Vinales have described the frightening crash that could have ended in catastrophe when both avoided incident in Spielberg.

Contact between Franco Morbidelli and Johann Zarco saw the pair go down on entry into turn three, causing their bikes to tumble toward the tight, right-hand hairpin at high speeds.

Vinales and Rossi were in formation at the time of the incident when both Morbidelli and Zarco’s stricken bikes cartwheeled back across the track, narrowly avoiding the pair by the closest of margins. It was a turn of events that left both visibly shaken when the red flag flew.

Rossi managed to recover to finish fifth once the race restarted in a continuation of his recent form, later suggesting Zarco was at fault and going to discuss the incident with the Frenchman. He’s called for riders to further respect rivals on-track.

“It was very scary,” Rossi explained. “All four riders, but especially me and, also Maverick, were very lucky. We have to pray to somebody tonight, because the situation was very dangerous. I think it is good to be aggressive, for sure, because everybody tries to do the maximum, but for me we don’t have to exaggerate.

“We need to remember that this sport is very dangerous. You need to have respect for your rivals, especially at a track where you’re always going at 300km/h. I have already spoken with Zarco, he promised me that he didn’t do it on purpose. He went very wide in braking and he slammed the door in the face of Franco.

“With this bike when you ride 300km/h you have the slipstream, so Franco didn’t have any chance to brake. I was with Maverick when we entered turn three and I felt something coming towards me. I thought it was the shadow of the helicopter, because sometimes it crosses the race track, but then Franco’s bike passed me at an incredible speed, and also the bike of Zarco jumped over Maverick.

“So, we were very lucky, but we hope this type of incident is a lesson for riders to improve their behaviour in the future. I spoke with Franco, he is okay, he is trying not to think, but when he thinks, he too feels scared. What makes the difference on this occasion is that nobody got hurt, all riders are okay, so this changes the situation.

“If something bad had happened, it would have been completely different. It was difficult to restart, sincerely, but I didn’t have a lot of choice, so I restarted and in the race I was good – I did a good race. For us, with the Yamaha, it’s not easy here.

“We suffer in top speed, so it’s very difficult to fight with the other bikes, but I had a good pace. Unfortunately, I had a very aggressive overtake from Binder in turn nine that pushed me out of the track and we lost a lot of time and lost contact with the first group. But anyway, from that moment on I still had a good rhythm, and I could arrive in fifth place. We can do better, but it was a good race.”

Vinales, meanwhile, was hampered by a clutch issue in the race’s second part, working his way from the rear of the pack to salvage 10th once the problem was corrected. He’s called for the circuit to be adjusted in that section of race-track.

“Today we were very lucky, this is the most important,” said Vinales. “We’re good. These things can happen in races, there’s always that risk. And this corner, turn three, we say every time that it’s really dangerous. They need to do something, because it’s really easy to crash there. This morning I nearly crashed in the warm-up. I locked the front and went a bit towards the walls and that was scary.

“But on the bike, during the incident in the first race, I didn’t see anything, honestly. I just heard the scratching sound of crashed bikes and then I felt the impact of Johann’s bike hitting the wall. Then, when I looked, I saw one bike coming towards me and I covered my head and the bike jumped up. For sure we were very lucky today, someone saved us, and this is the most important.”