Zarco and Morbidelli at odds over scary high-speed clash 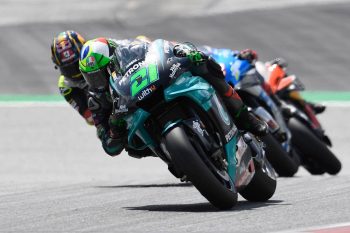 Frenchman Johann Zarco has thrown out any suggestion that he was purposely at fault in the collision between he and Franco Morbidelli at the Austrian MotoGP, despite the duo having mixed opinions on the incident.

The Esponsorama Racing rider’s move has been questioned from a number of premier class rivals following the incident that saw he and Petronas Yamaha SRT’s Morbidelli touch prior to turn three and both crash.

While both Zarco and Morbidelli were able to avoid injury in the scare, it was the close call that almost saw their crashed bikes smash into Monster Energy Yamaha pair Maverick Vinales and Valentino Rossi that has sent shockwaves through the paddock.

“Physically, my body is okay – just a few bumps in the arms, hips and leg – and… really bad moment,” Zarco commented. “In this crash, when I overtook Morbidelli then I was braking. For sure, maybe because I was coming from left, I went a little bit on the right and Franco has been surprised.

“As soon as he touched me we lost control, because at this speed we could not control the bike in this moment. When we touched it was finished and he told me that he has been surprised, so, I can understand with the speed. I’d been very scared during the crash, then when I watched it again, it was very lucky that the bike doesn’t touch anyone.”

A statement released by the satellite Ducati team of Zarco said that his GP19’s data proved that his move wasn’t intentional: “After the comments and declarations that have been made, Johann Zarco is very affected, as at no time did he intend to carry out a manoeuvre that would endanger any other opponent.

“However, he wanted to apologise and clarify with each and every one of the riders involved in this race incident. Nevertheless, the telemetry showed that Zarco was braking later in turn three than in the rest of the race, so it is clear from this analysis that at no time was his intention to harm Morbidelli’s braking and close his line.”

After being stretchered away and then soon cleared of injuries in the medical centre, Morbidelli said that it was a ‘strange crash’ that was caused by Zarco running wide through the left-hand kink before the contact was made.

“I’m a little bit sore, but everything is fine,” the Italian said. “Looking at footage of the crash it is good to be able to walk away like this – I consider myself to be very lucky.

“It was a strange crash because Johann overtook me on the straight and then changed his line under braking to go very wide. With the changed line and the slipstream, there was just nowhere for me to go, it was impossible for me to avoid him – thankfully we are both alright.”

Zarco and Morbidelli have since discussed the frightening collision, along with nine-time world champion Rossi, who was almost struck and incredibly averted disaster alongside teammate Vinales in the crash that has since made headlines globally.