Disappointment for Gardner in crash from Moto2 pole 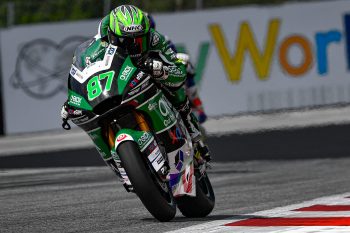 A crash while in podium contention has come as more disappointment for capable Australian Remy Gardner in the Moto2 race at Red Bull Ring after lining up in pole position.

Gardner starred on Saturday by recording a 1m28.681s to top qualifying by just 0.036s, but a drama-filled restarted race saw him exit proceedings at turn one in the middle stages.

“The feeling with the bike was good and, even though I was still struggling a little with straight-line speed, I was confident that we could produce a good result,” Gardner reflected. “Quali was almost perfect – I showed I have big balls when it matters and was able to get the lap done. I got a little bit of slipstream in sectors one and two and managed to keep it flowing in the final part of the lap.

“I was super-happy and couldn’t wait to race. I was pushing very hard, struggling with the speed in first and second sector. I was trying too hard to make up the time on the brakes and unfortunately I ended up crashing. A big mistake, very costly for the championship, but we just have to keep fighting.

“We showed yesterday that we have the speed, we now just need a little luck. I’m glad that all those involved in the incident are okay. Looking forward and not backwards. Thanks once again to all those sending positive messages on social media… means a lot!”