Pit-lane start the penalty of Zarco for Austrian GP incident 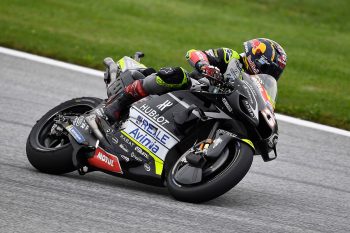 Injured Frenchman Johann Zarco will start from pit-lane in his next MotoGP race, still a question mark for this weekend in Austria after undergoing scaphoid surgery on Wednesday.

The sanction for his high-speed clash with Franco Morbidelli (Petronas Yamaha SRT) that caused last weekend’s chaos was confirmed during FP1 this morning.

According to the FIM MotoGP Stewards Panel of Bill Cumbow, Freddie Spencer and Ralph Bohnhorst, Esponsorama Racing Ducati rider Zarco was ‘found to be riding in an irresponsible manner causing a crash’.

Zarco underwent surgery in Italy this week when it was revealed that he fractured his right scaphoid in the fall, but he won’t know if he’s fit to ride in the Grand Prix of Styria at Red Bull Ring until he attempts to ride in practice on Saturday.

“The operation was good,” Zarco said. “Now I need to wait 48 hours for the medical check, so [Friday] I will not ride the bike – I hope I can do it on Saturday. After the surgery I’m getting better, but I don’t feel ready yet to ride.

“I hope that waiting 24 hours more I will feel better and I can do some laps on Saturday to improve the feelings with the bike. To miss tomorrow the two free practices, it’s not a big drama because we have last week references and the bike is fast in this track.”

Prior to learning of his penalty, Zarco added: “Today I had the meeting with stewards to explain everything well about the overtake to Morbidelli and contrast it with the data. I didn’t do anything crazy, so I hope they understand this and we will wait to the final decision.”

If the penalty is to be served in Spielberg this weekend, the decision is final, however, should he not be fit to ride and it is to instead be applied at a following round, Zarco could have to opportunity to appeal the sanction.