Yamaha to investigate fault thoroughly prior to Misano race weekend. 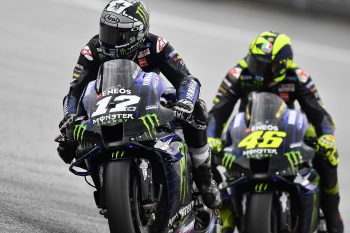 Yamaha will investigate the malfunction that led to Maverick Vinales’ brakes failing on Sunday in the Styrian GP, forcing the MotoGP title threat to leap from his factory YZR-M1 entering turn one at Red Bull Ring.

Vinales had been experiencing problems under braking in the race when he dropped back to 12th place, but a complete failure at 220km/h forced him to disembark as his Monster Energy Yamaha was sent into the track’s air-fence.

“Unfortunately, it’s another weekend to forget,” commented Yamaha team manager Massimo Meregalli. “Maverick had a problem with his bike’s brakes in race one. He decided to keep riding, hoping to salvage some crucial points for the championship.

“But, when he approached turn one without brakes he had to make the split-second decision to jump off the bike. We are thankful he wasn’t hurt and we will investigate the issue most thoroughly in the coming two weeks as we prepare for the next triple-header.”

Vinales said it was an ‘amazing’ incident and the first time in his career that he’s had to jump from the bike at speed as a result of the brakes malfunctioning. He’s now fifth in the standings, 22 points from Fabio Quartararo (Petronas Yamaha SRT).

“I was losing the brakes from lap four onwards,” Vinales explained. “These have been three really tough races where we could have done a really good job, but due to our mistakes, we’re not at the front. For sure, today’s crash was amazing. I never had that feeling before, where I completely lose the brakes and have to jump off.

“I understand how it happened, the brake overheated, but for sure it’s not a common problem. Luckily, I’m okay – this is the most important thing – [and] I will be 100 percent fit again in Misano. You know, we have to stay positive and focus on the next rounds.”

Rossi also experienced braking dramas in the first start: “Fortunately, Maverick was able to jump off the bike in time, it was a very scary moment. In these last two weekends we were on the limit with the brakes, especially with the Yamaha.

“I had a problem with it last week and this week we modified it, working together with Brembo. In the first race today, the brakes were not fantastic, but in the second race the brakes were good and I didn’t have any particular problems.”