Podiums for Miller in premier class and Gardner in Moto2 at Styrian GP. 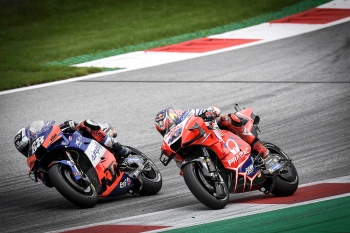 For the second week running, a red flag stoppage had a huge bearing on the race with the Monster Energy Yamaha MotoGP machine of Maverick Vinales involved again, this time after he lost brakes on the main straight and had to bail from his bike at over 200km/h. The bike slammed into the air fence and caught fire, causing a short delay.

In the opening stanza of the race it was the Suzuki of Joann Mir (Team Suzuki Ecstar) and Miller that had shown the strongest pace, with Mir holding an advantage at the front of almost half a second by lap eight. Miller was still able to stay in touch despite the pain from his shoulder injury in FP3, as was Takaaki Nakagami (LCR Honda Indemitsu).

Slightly behind, pole sitter Espargaro had developed his own battle with the other Suzuki of Alex Rins with Brad Binder (Red Bull KTM Factory Racing) and Andrea Dovizioso (Ducati Team) looming in the background. It was at this point that Vinales had to pull off the racing line with braking issues, however he would later say the problem had been occurring from lap three.

As the factory Yamaha of Vinales hurtled towards turn one, Vinales, realising he had no braking power, leapt from the bike and sliding down the road. He was lucky to walk away practically uninjured, but the red flag bunched up the field including Johann Zarco (Esponsorama Racing), who had started from pitlane.

At the restart it was now a 12 lap sprint race, as Miller completely eroded the advantage of Mir and with soft rubber now fitted to his Ducati, he dispatched of the Suzuki and attempted to bolt from the field. Mir had continued with the same tyres he had in the first part of the race, and now the KTM’s of Espargaro and Oliveira were reeling him in.

Pol Espargaro set the fastest lap of the race with eight laps remaining, passing Mir before putting Miller in his sights. He eventually took the lead from Miller but wasn’t able to pull a substantial gap. With Miller and Oliveira shadowing Espargaro, Doviziso and Mir were still within striking distance. On the final lap, it came down to a battle of three.

Espargaro begun the lap in the lead and got a good run out of the first corner, but was very defensive. Miller swooped up alongside showing no signs of shoulder pain, making the move stick into the tricky, downhill right-hander.

Miller was looking good for his first dry race win, but Espargaro somehow managed a move up the inside of Miller, bringing it down to the final corner. With a strong run under brakes Miller braked late made his move on Esparago, and if it were only the two of them victory would belong to Miller. He had pushed them both very deep, however, and all that time Oliveira had been waiting for any opportunity.

Oliveira completed the perfect ambush, blasting past them both to score his first MotoGP victory. He become the fourth different rider to win a race this season and the first winner from Portugal, while the second victory for KTM means they now lose their manufacturer concessions. It was also a great moment for Red Bull KTM Tech 3 boss Herve Poncharal, who also chalked up his first victory after having come so close with Yamaha machinery.

Runner-up Miller picked up his second Red Bull Ring rostrum of 2020, with Espargaro completing the podium. Mir was just behind in fourth, with Dovizioso and Rins in fifth and sixth. After such a strong performance prior to the red flag, Nakagami had to settle for seventh as Binder, Valentino Rossi (Monster Energy Yamaha MotoGP) and Iker Lecuona (Red Bull KTM Tech 3) rounding out the top ten. 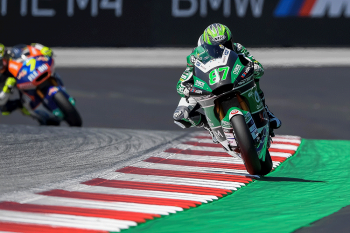 In Moto2 the drama was flowing freely after it looked as if Jorge Martin (Red Bull KTM Ajo) had won for the second week in a row. However, Martin was relegated into second position with SKY Racing Team VR46’s Marco Bezzecchi awarded the win as it was determined Martin had exceeded track limits on the final lap. Martin led from the start as pole sitter Aron Canet (Openbank Aspar Team) lost the front early on.

“It was strange to arrive second and then switch! All the race I was strong but not strong enough in braking to overtake Jorge,” commented Bezzecchi after the race. “I pushed a lot to make the gap and the tyres were a bit on the limit. When I came out of T8 I saw he touched the green a bit.”

Australian Remy Gardner (Onexox TKKR SAG Team) rode a smart race to be rewarded with the final podium spot: “It’s a shame about last weekend as I really think we could have made it two podiums, but today makes up for it. I gave it everything, especially on the brakes so we need to find some more straight line speed but as I say, overall I am really happy to get this podium. Big thanks to everyone who is supporting me, my sponsors, and the fans. Let’s hope we can keep this momentum when we move to Misano!”

After showing strong pace over the weekend Sam Lowes (EG 0,0 Marc VDS) had a shocker and was later penalised with a pitlane start at the next round after he crashed and took out several riders on the entry to turn three. Lowes was shown the black flag but he crashed again before he could enter pitlane. 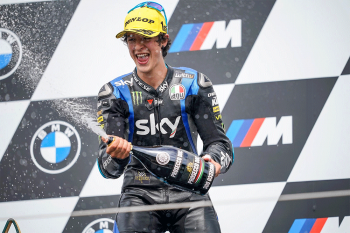 “This is the best day of my life, a lot of emotions,” Vietti explained after the race. “I tried to manage the battle in the first part because last week I was at the back of the group, I was all the race trying to overtake, in 10th position. Today we tried to stay in front and on the last lap I tried to overtake Tony, he overtook me and we had a battle, like when we were young, and the last lap I tried to make a clean lap, and I finished first!”

A fifth place to Albert Arenas (Valresa Aspar Team) means he still holds the championship lead by 25 points back to Ogura. 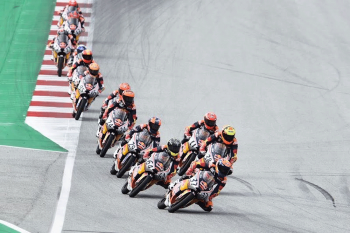 In the Reb Bull Rookies Cup Pedro Acosta continued his clean sweep in 2020 by securing a fourth successive victory at the Red Bull Ring. In race one he took the win by 0.053s from Daniel Holgado with David Muñoz third. On Sunday Acosta sealed the double at the final turn after Daniel Muñoz ran wide and dropped to third behind Iván Ortolá.

Australian Billy Van Eerde had led the opening race on Saturday, but it was his only highlight. “At least that’s something,” commented Van Eerde. “I’m happy about that and happy that we have the pace to run in the front of the group but late in the race I lost it and couldn’t get it back. I still need to do more and be able to be at the front all the way.”

Van Eerde copped a post-race three second penalty which dropped him to 11thafter he had crossed the line in eighth. In the second race on Sunday he crashed out and now sits 12thin the standings on 15 points. Acosta leads the series by 36 points with another eight races to go. 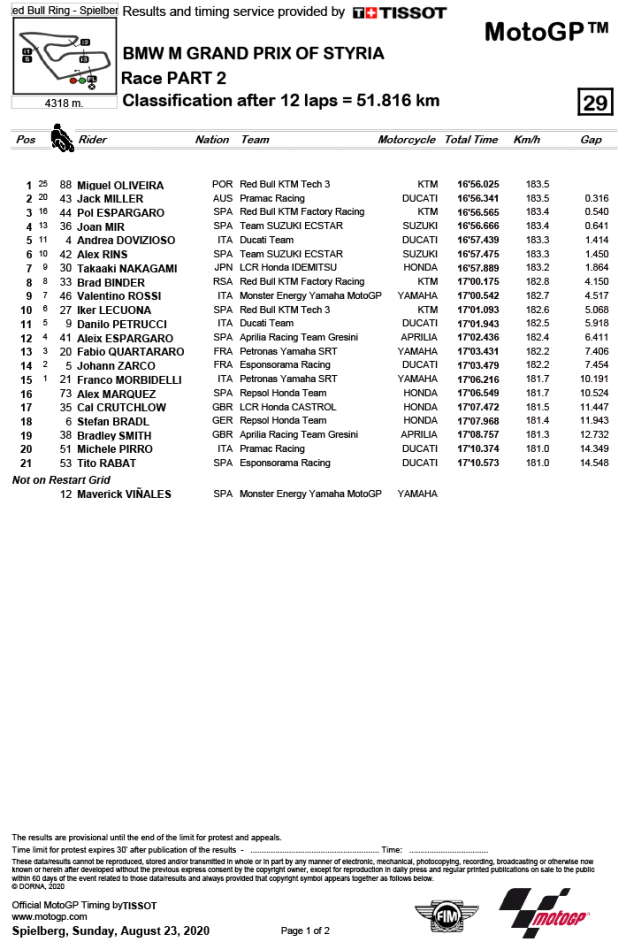 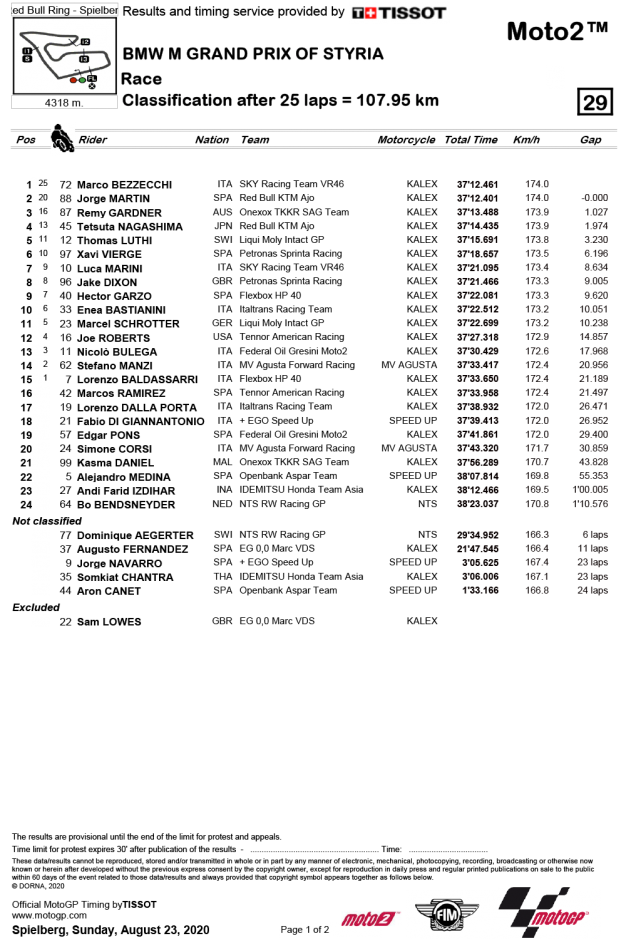 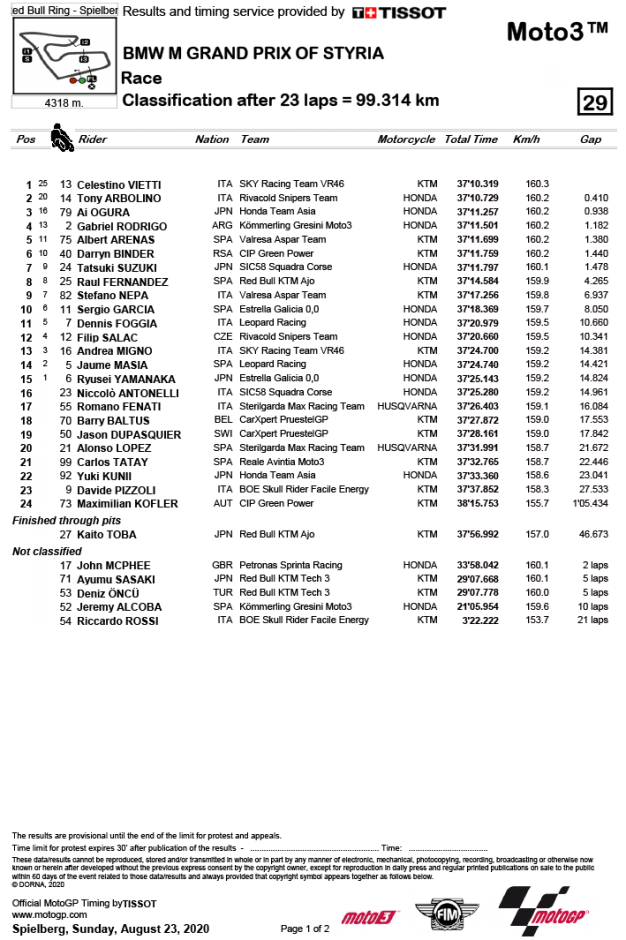 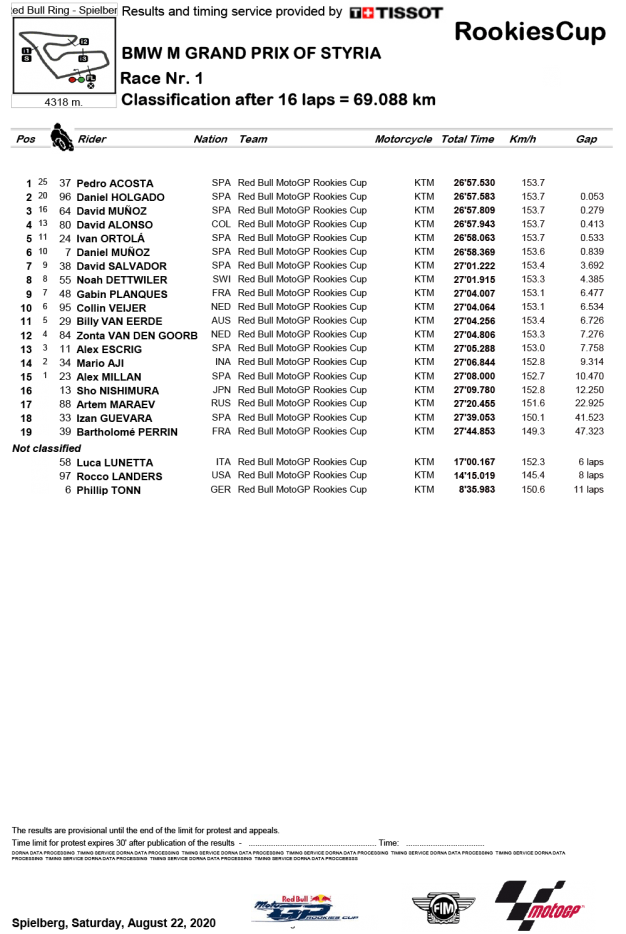 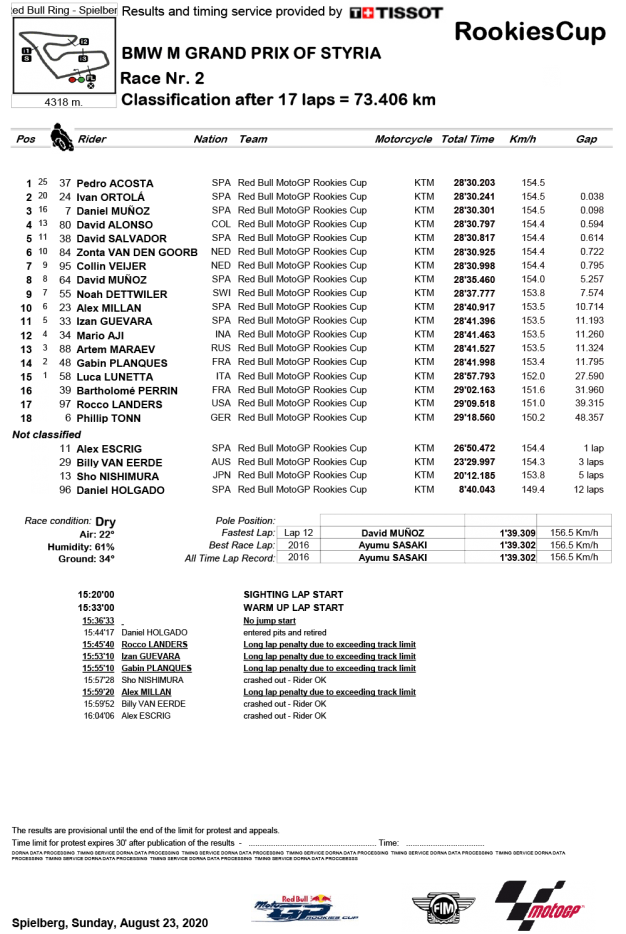