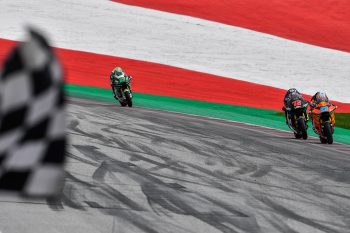 Finishing third in Sunday’s Moto2 affair at the Grand Prix of Styria made up for Remy Gardner crashing out of the Austrian round just seven days earlier, he admitted following a convincing two weeks at Red Bull Ring.

Gardner starred when he scored pole position the weekend prior, but crashed out of podium contention in the race. This time around, after qualifying on the second row, the 22-year-old charged to his first podium of 2020.

“We worked well on Friday, especially on race pace, so I would say it was a positive opening day,” Gardner said. “I was on pole last weekend, but the mission this weekend was to get onto the top two rows, and we did that. Overall, I was quite happy, I found the limit towards the end of qualifying and had a small crash, but it’s better to crash not in the race.

“I am extremely happy with the work that we have done here in Austria. The team has done a great job and we have been able to show our potential both over one lap and over race distance. It’s a shame about last weekend as I really think we could have made it two podiums, but today makes up for it.

“I gave it everything, especially on the brakes so we need to find some more straight line speed but as I say, overall I am really happy to get this podium. Big thanks to everyone who is supporting me, my sponsors and the fans – to now have over 10,000 followers on Twitter is insane. Let’s hope we can keep this momentum when we move to Misano!”