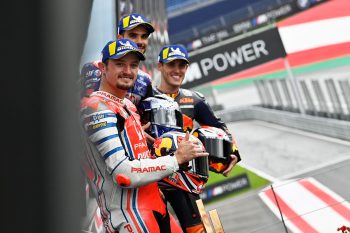 Back-to-back podium finishes have boosted Jack Miller to third in the MotoGP points, despite overcoming ‘excruciating pain’ in his shoulder at the Styrian GP.

The Pramac Racing rider looked like he would be able to snatch a second MotoGP win at Red Bull Ring on Sunday until a last-gasp move from Miguel Oliveira denied the Australian.

It was a convincing performance from the 25-year-old Miller, who crashed on Saturday and hurt his shoulder in FP3 and was uncertain for the race at one point. He has since established himself as a title threat despite crashing out of Jerez two earlier in the season.

“Yesterday was excruciating pain,” Miller recalled. “I just jumped on the bike in Q2, went out and tried winging it – sort of understood where it was gonna hurt the most. Honestly, that Q lap was like, I basically put a stick in between my teeth, bit down as hard as I could and held on for a lap. Thankfully that was enough for second row.

“It felt bad, so I knew I needed a night and as soon as Q2 was over I was straight into the Clinica [Mobile], icing it, doing the rotations and I can’t thank those guys enough. I got a machine off them last night, just sat down on the lounge doing cycles, cooling and heating.

“The medical staff at the track organised for an MRI this morning, honestly everyone has been top-notch to us and I felt great. I struggled a little bit more in the first race, just from not having the power in my shoulder. We tried to reset for the sprint race, refocus and it kind of reminded me of the old days in the Australian championship.

“Five laps went real quick and I wasn’t expecting Oliveira there, I thought it was between Pol [Espargaro] and I, so I did what I needed to do. I looked up the inside and… there was Oliveira, I was like, ‘where did he come from!?’. Massive congratulations to him.”