When The Doctor stood back atop the podium during 2014 season.

As MotoGP returns to Misano for the 24th time this weekend, it is a venue that is known as Valentino Rossi’s home track. Located about 10 kilometres from the Italian legend’s hometown of Tavullia and an army of fans drowning in a sea of yellow is practically guaranteed every year. The 41-year-old has won three times at the San Marino Grand Prix, victorious in 2008, 2009 and perhaps most notably in 2014.

It would be hard to argue that anything could top the emotion of 2008, when Rossi seized upon a Casey Stoner mistake and equalled Giacomo Agostini’s record of 68 class victories. When he backed it up again the following year it was wearing the infamous ‘Donkey’ helmet, inspired by his fall at the Indianapolis Brickyard one round previous. Both of these victories could be said to have underpinned Rossi’s title assault, which he went on to claim in both 2008 and 2009. 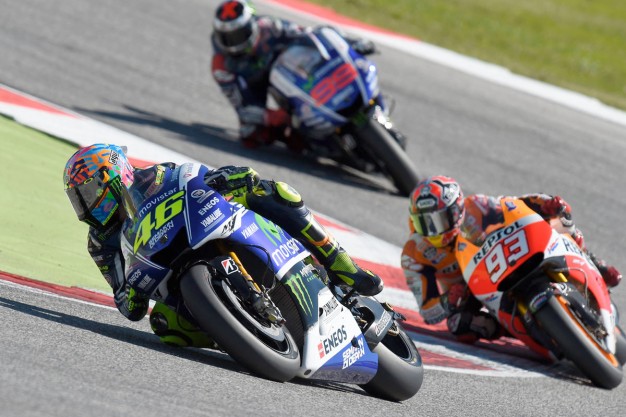 Two other riders have had similar success at Misano including Rossi’s Yamaha teammate at the time, Jorge Lorenzo (2011, 2012 and 2013) and Honda’s Marc Marquez (2015, 2017 and 2019). The Misano World Circuit Marco Simoncelli only returned to the MotoGP calendar in 2007 after 13 years of exodus following the accident that ended Wayne Rainey’s career in 1993. When MotoGP did return, it was on a revised 4.18 kilometre layout that ran in the opposite direction.

In 2014, Rossi was feared to be a spent force. He had endured the Ducati years and was still attempting to re-establish himself at the pointy end of the MotoGP field. Qualifying had gone the way of Lorenzo, the previous year’s winner, securing his first pole position since Motegi in 2013. The Pramac Ducati of Andrea Iannone was second, with Rossi completing the front row. For the first time that season, Honda’s world champion Marquez was off the front row in fourth. 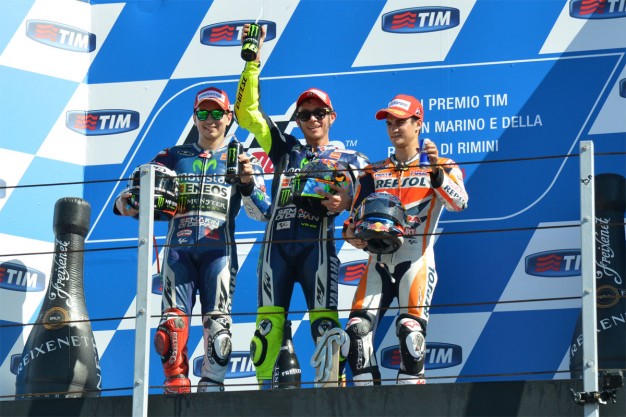 Lorenzo took a flier off the line, looking for his fourth-successive Misano victory. Behind him, Rossi and Marquez traded progressively aggressive moves, neither wanting to concede the advantage. The 55,000 strong crowd drowned out the sound of the bikes as the pair attacked and counter-attacked, pushing past Lorenzo to go first and second. Rossi was applying the pressure, pushing the pace to the point where it all came unstuck for Marquez.

On lap 10, Marquez capitulated and low-sided at Rio corner, eventually restarting to finish 15th. Rossi, still out front, never let up, priming the crowd for an epic victory. He forced the pace until the end, winning by 1.578s from Lorenzo and Dani Pedrosa. The wildly partisan crowd were sent into hysterics as ‘The Doctor’ rode into the history books and took his first race victory since Assen the previous year, chalking up 107 wins and 5000 career points in the process.