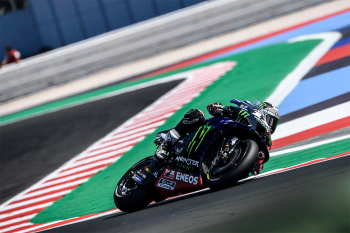 Maverick Vinales and the Monster Energy Yamaha MotoGP team have stolen pole position and a new lap record of the Misano World Circuit Marco Simoncelli that sees Yamaha machinery filling the top four spots on the grid after qualifying for the San Marino MotoGP overnight.

Vinales’ 1:31.411s lap edged out Yamaha stablemate Franco Morbidelli (Petronas Yamaha SRT) by 0.312s with the front row completed by teammate and Championship leader, Fabio Quartararo (Petronas Yamaha SRT). The second factory Yamaha of Valentino Rossi sent the maximum allowed 10,000 wild after taking fourth ahead of Australian Jack Miller (Pramac Racing), who was the fastest Ducati. Miller was pleased with his effort, saying, “Not a bad day, I was fast since this morning ,during the FP3 I had a small crash but I’m ok.” Millers injured teammate Francesco Bagnaia (Pramac Racing) completes the second row.

Alex Rins (Team Suzuki Ecstar) is the leading Suzuki in P7, beating teammate Joan Mir by 0.012s. Andrea Dovizioso (Ducati Team) will have to work his way through the field as he did in Austria after qualifying in P9. Johann Zarco (Esponsorama Racing) completed the top ten.

So far the Misano double header has seen a resurgence for Yamaha, with a confident Viñales the first rider out on track for Q2.
“I‘m really happy because that lap was amazing!” Vinales said. “Not just because it gave me pole position, but more so because of the time itself. We knew our potential and took everything we had, and we made a really good lap. Breaking the lap record was really hard for me.” For championship leader Quartararo, he is only concerned about the race, commenting, “The most important thing, of course, is the 27-lap race. I’m feeling positive because we have the pace for victory, so let’s see what happens.”

Cal Crutchlow (LCR Honda Castrol) has been ruled out of Sunday’s race as well as next weekend due to an unusual mass of fluid following surgery on his forearm. 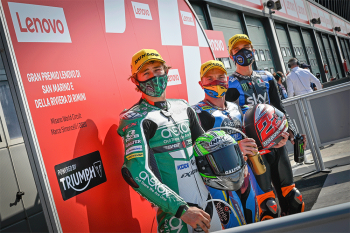 In Moto2 Sam Lowes (EG 0,0 Marc VDS) took pole position by over 0.254s, breaking the lap record in the process. However, he will be forced to start from pitlane on Sunday after receiving a penalty for the crash he caused in Styria. This promotes second-placed Remy Gardner (OneXOX TKKR SAG Team) to first on the grid. Championship leader Luca Marini (Sky Racing Team VR46) will start from second with Marco Bezzecchi (Sky Racing Team VR46) completing the front row.

MotoE served up plenty of drama with Matteo Ferrari (Trentino Gresini MotoE) taking his very first E-Pole after snatching the honour from compatriot Mattia Casadei (Ongetta SIC58 Squadra Corse). The 2019 Cup winner and Misano victor won’t start from the front, however, with Casadei promoted to P1 as Ferrari serves a three-place grid penalty for his crash with Eric Granado (Avintia Esponsorama Racing) in Jerez. Third fastest in E-Pole was Xavier Simeon (LCR E-Team). Front running Granado exceeded track limits during his hot lap, having his time cancelled. He’ll therefore start from the back while Australian Josh Hook (Onto Pramac MotoE) will start from 15th. 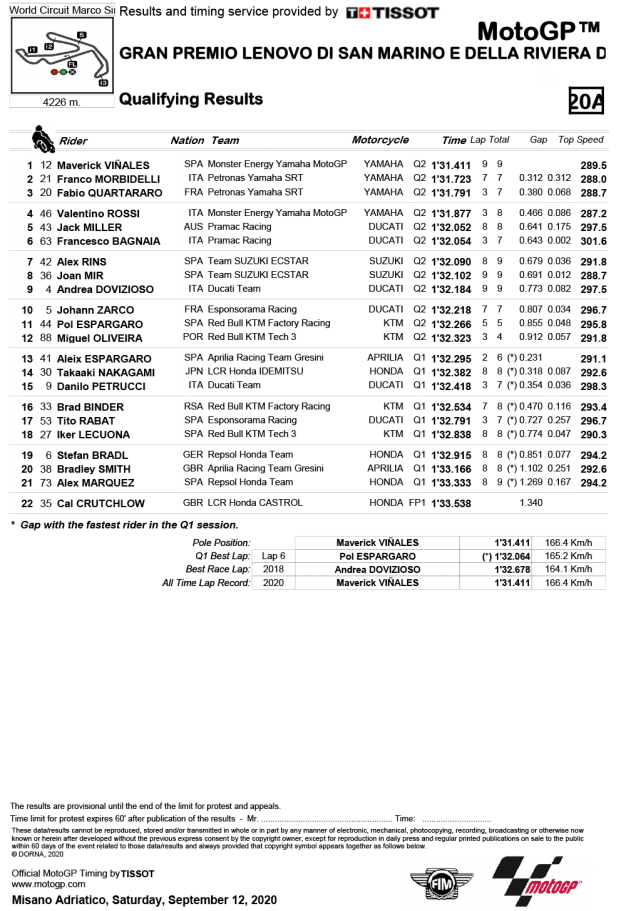 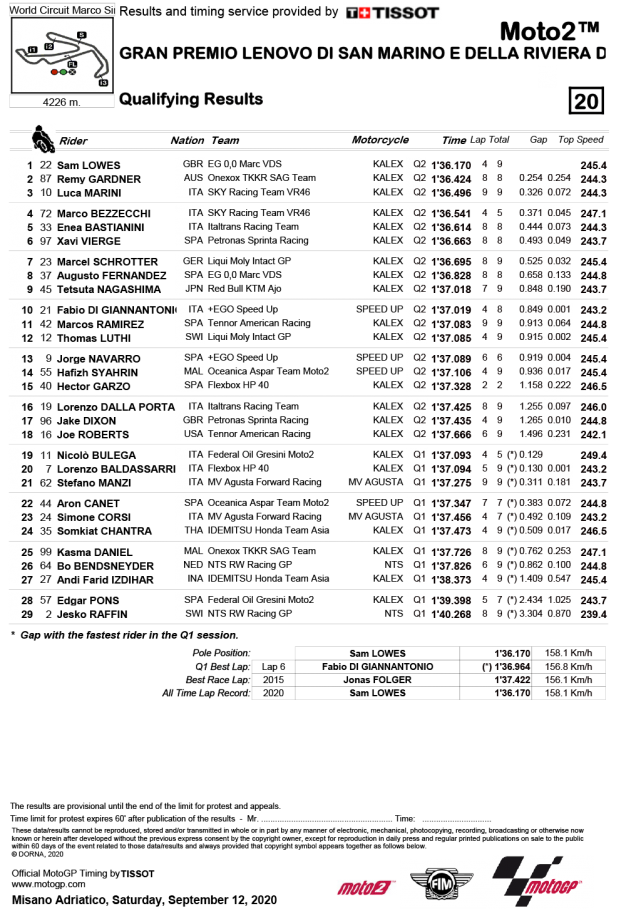 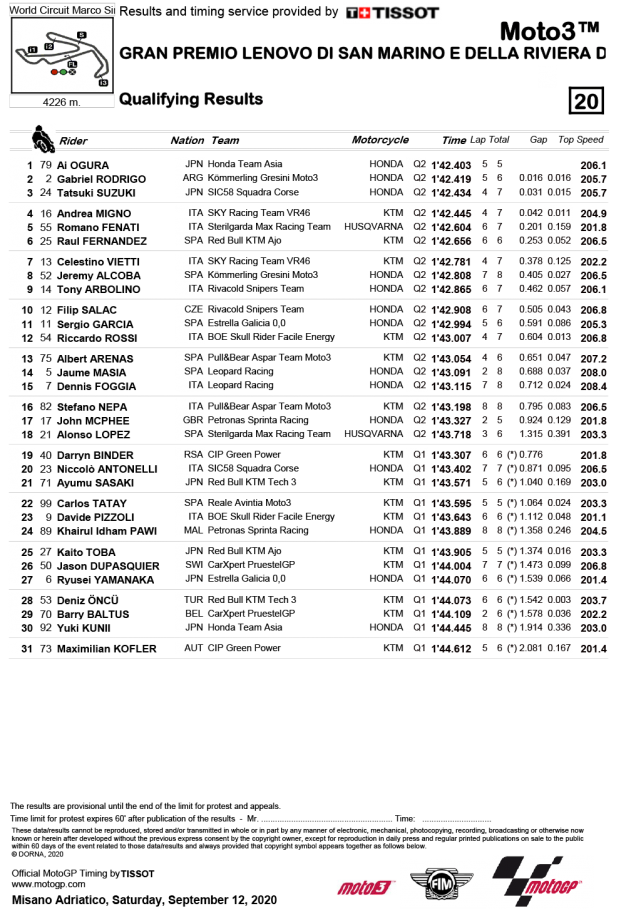 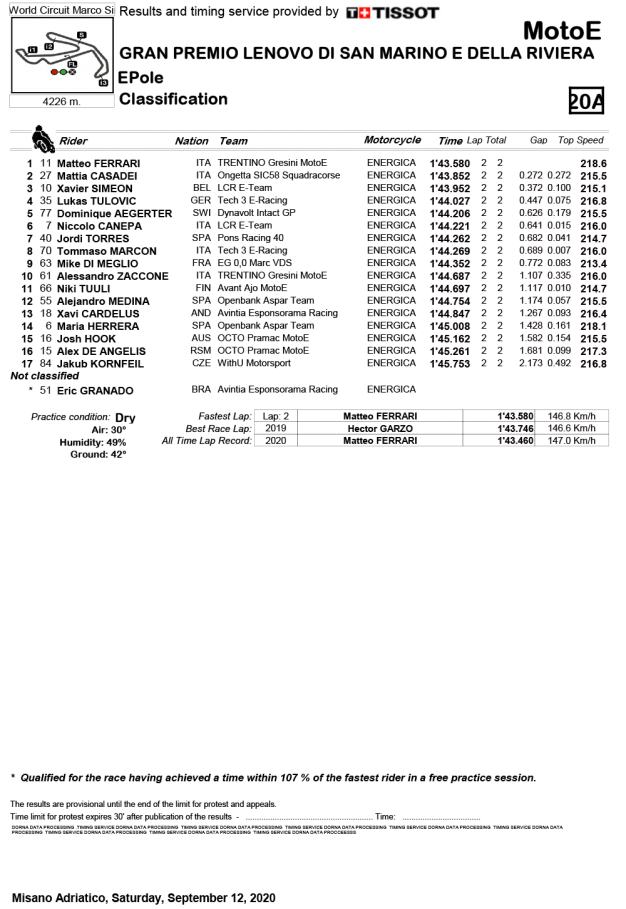